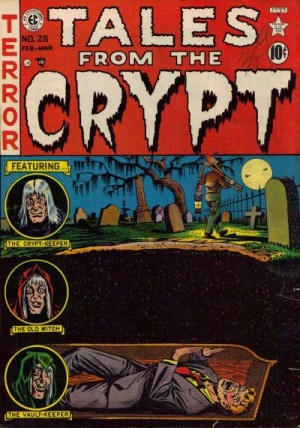 "The Earth is suffocating. Swear to cut me open, so that I will not be buried alive."

The villain has the hero incapacitated. Maybe he drugged him/her. Maybe he conked him/her on the head with an inanimate carbon rod. Maybe, and this seems unlikely, the hero has willingly given himself/herself to the villain.

Does the bad guy shoot the good guy in the head? Cut his throat? Decapitate him? Stick him in an elaborate, above ground Death Trap? Nope. He's got something far worse planned: he's going to bury the hero. Alive.

Sometimes, he'll tie the hero up before dumping him/her in the coffin. If the villain's a sporting sort of fellow, he'll provide a flashlight or an air canister. Regardless, the villain is going to kill the hero in one of the most appalling ways imaginable.

There's a wide range of reasons a bad guy does this. He might be righteously angry at the hero and is intent on making him suffer for past mis-deeds. ("37 years ago you stole my Froot Loops at recess. Now, it's payback time!") It could be a matter of security; there's no murder weapon and you don't have to worry about disposing of the body, since, hey, you just did. Often, however, it's just a matter of the villain being a sadistic prick.

Of course, as with most forms of killing the hero that favor cruelty over efficiency, the hero frequently manages to dig their way out of this, or a sidekick will pop out of the bushes and dig him up the moment the villain is satisfied and leaves.

Heroes generally don't do this, even to bad guys. It's a pretty awful thing to do to another human being, no matter how evil they really are. The exception to that, such as it is, comes when the hero blows up an ancient building or tomb while the villain remains inside. If the bad guy survives the blast and falling debris, he'll technically be buried alive. But that's not really the same thing, and usually treated more as a Sealed Evil in a Can situation. Another exception is when the villain has already done the same kind of thing to the hero or one of his friends, in which case it can be seen as a form of Karmic Death.

Very popular because it really does touch on something that just creeps the living hell out of human beings. Claustrophobia in general is obviously widespread, and the specific fear of being buried alive is just slightly less so.

Occasionally, cases like these will actually pop up in real life, though obviously not with the same frequency as they do in fiction. In the days before modern medicine, it was more common for it to happen as an accident when the doctors made a mistake about whether someone was really dead. Urban legend has it that this is why people used to have wakes, but there is little to no historical data that supports this.

Overlaps with Sealed Room in the Middle of Nowhere, and sometimes with Quicksand Sucks. A beautiful example of Nightmare Fuel. If this is done to a character because he can't be killed, it's And I Must Scream. Despite its categorization, this isn't restricted to the horror genre, as you can see in the examples.

A close cousin of this is the "Sand Neck Tie", where a character is buried up to their neck in sand, with the intention of death from the incoming tide, dehydration or nasty animal-related death.

Examples of Buried Alive include:

Death: Dark in here, isn't it?

Find him, bind him / tie him to a pole and break his fingers to splinters / drag him into a hole until he wakes up naked / clawing at the ceiling of his grave...

Jack: Oh, what, that underground thing? I just punched my way out.
Craig: What? What?! That doesn't make sense!!! You were over there when I buried you!
Jack: Right, yeah, I punched in your direction.
Craig: In my direction?!
Jack: It's not my fault if I can hear your incredibly nasal voice underground.

"I can hold my breath for a long, looooooooooong time!"

"Say, you wouldn't have an extra hat on you, would you? Shade's getting' scarce in these parts."