Call a Rabbit a Smeerp 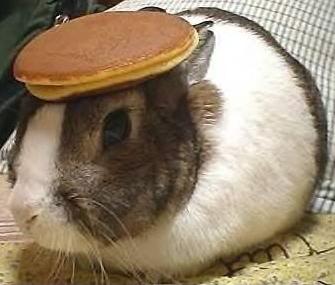 A smeerp wearing the ceremonial jackflappen.

The planet of the Rubber Forehead Aliens is just like Earth (or at least just like the Planet of Hats)...but we're in space, so regular old Earth flora and fauna just won't do.

Solution: Introduce creatures (or sports, or political institutions, or dishes, or...) that are just like familiar Earth concepts that the audience will recognize but in SPACE, and give them funny names.

Older and more retro series will forgo the funny names entirely, and call everything "Space this" and "Galactic that".

See Part One of the SFWA's Turkey City Lexicon for more detail. Writers are warned against this trope in Orson Scott Card's How to Write Science Fiction and Fantasy. However this trope can also be used intelligently by works with characters that are part of a culture that has a unique way of viewing familiar concepts e.g. the rabbits from Watership Down.

May also be Justified Trope by a Translation Convention. If the viewpoint characters in the work encounter a lifeform that's new to them but already familiar to an alien culture, the alien culture will probably have their own word for it, and there's no reason for that to match the real-world name of the thing. However, in monocultural stories it's much easier to overuse this trope.

Compare You Mean "Xmas", Future Slang, You Are the Translated Foreign Word, Not Using the Z Word, and Uncoffee. See also Space X, Horse of a Different Color, Call a Pegasus a Hippogriff, Flintstone Theming, and Hold Your Hippogriffs. Contrast Call a Smeerp a Rabbit, Capital Letters Are Magic.

Examples of Call a Rabbit a Smeerp include:

Retrieved from "https://allthetropes.org/w/index.php?title=Call_a_Rabbit_a_Smeerp&oldid=1863827"
Categories:
Cookies help us deliver our services. By using our services, you agree to our use of cookies.