Call a Smeerp a Rabbit 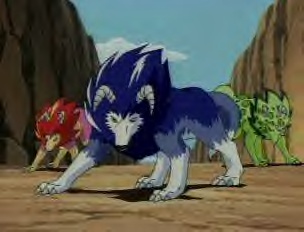 Just as Speculative Fiction authors like to give regular animals funny names, they also like to invent wild new creatures, give them the names of familiar animals, and plunk them down into their settings to run amok. The differences between the smeerps and their real-world counterparts can range from mild—such as "dogs" that have spiked backs and three tails in addition to all their normally canine traits—to extreme, such as bipedal, poison-spitting, frilled reptiles with saddles being referred to as "horses".

When used in non-visual media, the problem is that unless the author is very explicit right up front about the fact that the animal in question is quite different from what the word normally means, the reader may be hundreds of pages in before he runs across something that just doesn't make sense, which can be jarring. It shatters the Suspension of Disbelief when you have to suddenly change your mental image of the hero's faithful dog to include scales and a forked tongue.

A common trope in RPGs, especially when naming monsters.

There is some Truth in Television here—early biologists and naturalists would name newly discovered animals after the ones they were familiar with due to a resemblance in how it looks, sounds, or acts. This is why, just as an example, you'd need to distinguish between American Bison and Eurasian Bison. Often, it would be a very happy coincidence if the similarly named animals were actually found to be genetically related once Science Marched On.

And for whatever reason, everyone thought that every animal would have an "alien" equivalent. The closest equivalent to outer space back then was the ocean. Have you noticed how many sea creatures have names like "Sea/Mer + Name of Land Animal", IE Sea Lion, Cow, Horse, Slug, and Cucumber? RPGs like to run with this too. Note that quite a few cases are due to translation errors (see Dinosaurs Are Dragons for a specific example of this.)

Then again, maybe the very first naturalists were just lazy. Or apathetic.

The inverse of Call a Rabbit a Smeerp. When already fictional creatures bear little resemblance to their mythological counterparts, it is, depending on the case in question, either Our Monsters Are Different or Call a Pegasus a Hippogriff. Occasionally might be related to Translation Convention. See also Horse of a Different Color and Space X. Not to be confused with In Name Only.

Examples of Call a Smeerp a Rabbit include:

Retrieved from "https://allthetropes.org/w/index.php?title=Call_a_Smeerp_a_Rabbit&oldid=1887949"
Categories:
Cookies help us deliver our services. By using our services, you agree to our use of cookies.