Not Growing Up Sucks

Everything About Fiction You Never Wanted to Know.
(Redirected from Can't Grow Up)
Jump to navigation Jump to search 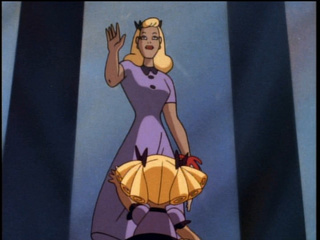 Sorry, Baby Doll, but you're stuck on this side of the mirror.

Some (well, many) kids think Growing Up Sucks. Then there's this. It turns out Immortality Begins At Twenty is only true for a lucky few, because due to some form of Phlebotinum, this child can never grow up. They are forever frozen in their preteens or early teens. If still organic and biologically alive, they will never mature enough to even seem close to becoming old enough for sex to the opposite (or same) gender, even if they're not so physically immature as to be entirely incapable of having sex. Thankfully, this usually doesn't come up. Interestingly, their intellect will very likely keep growing throughout their lifetime, but their emotional maturity may or may not undergo a similar growth. They may forever throw tantrums and sulk, or they may well develop an adult mindset or even go beyond it. In any case, expect this thwarted love life to cause them a great deal of frustration if not outright Wangst.

Oh, and in live-action television, there's one more thing to worry about. The actor who plays you is going to keep on aging, so sooner or later they'll probably kill you off. Vampire children are especially susceptible to this.

Common causes for not being able to grow up include but are not limited to: Being a robot, virtual copy, magically animated puppet, being cursed or an Undead Child.

May or may not overlap with Who Wants to Live Forever? and I Hate You, Vampire Dad. Sub-Trope of Blessed with Suck. Not to be confused with Not Allowed to Grow Up, which is about live-action characters being forced to remain the same age via Executive Meddling, not any in-story reason -- despite their actors growing up in the roles. Closely related to Never Grew Up (which is a voluntary decision by the child to not grow up). See also Legal Jailbait

Examples of Not Growing Up Sucks include:

Retrieved from "https://allthetropes.org/w/index.php?title=Not_Growing_Up_Sucks&oldid=1847986"
Categories:
Cookies help us deliver our services. By using our services, you agree to our use of cookies.