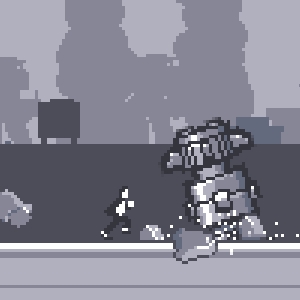 Someone is about to be turned into a fine mist.

You're the fastest man alive and somebody's really really mad at you. We think.

Canabalt is a 2D Side Scrolling arcade game that was created by Adam Atomic and Danny B. You play as a man who, immediately after the game begins, runs down a hallway and leaps through a glass window into open air. If that wasn't enough, he goes on to run across rooftops and jump through other buildings at ever increasing speeds until he finally meets his demise. It's never said exactly what he's running from, but the falling missiles and the giant bipedal shapes in the distance provide some clues (and someone even wrote an unofficial backstory designed to explain everything).

It is found here. There is also an iPhone version with a few additional features, including an alternate soundtrack. An official Commodore 64 version of the game exists(!), see here.

If you are wondering if this could be any more awesome, check out Robot Unicorn Attack, which is a prettied up version of this.

Tropes used in Canabalt include:

You ran 3604m before hitting a wall and tumbling to your death.

You ran 2509m before turning into a fine mist.

You ran 102m before barely stumbling out of the first hallway.
You ran 3780m before riding a falling building all the way down.
You ran 4510m before knocking a building down.
You ran 2287m before somehow hitting the side of a billboard.

You ran 5087 characters before running out of trope.