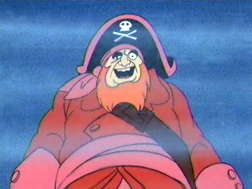 Probably as a result of infamous sailors like Blackbeard and Barbarossa, it's popular to give pirate or nautical characters names that reference their facial hair—and not just sailors, either.

Despite the title, the beard name isn't restricted to names based around colors, or even necessarily beards (you'll see names like "Captain Blackheart" or "Captain Deadeye" about as often, and of course there's Captain Hook).

Examples of Captain Color Beard include: