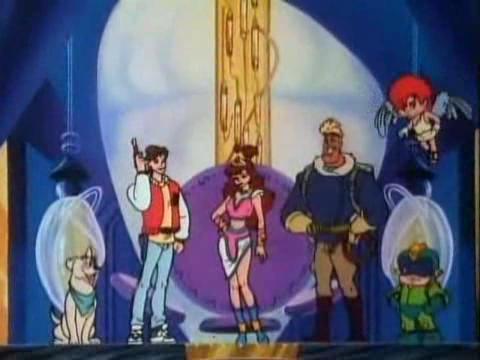 Captain N: The Game Master was an Animated Series based on the popular Nintendo games that weren't Super Mario Bros. It told the story of Kevin Keene, a teenager who loves playing video games, so much that one day he and his dog, Duke, are sucked into the TV and they enter a strange dimension called Videoland.

Once there, Kevin learns that he is to fulfill a prophecy as "Captain N", a savior sent to save Videoland from the forces of evil, lead by the Audrey II-esque Mother Brain (the main villain from Metroid). Joining him are Videoland's sovereign Princess Lana, Mega Man, Kid Icarus (who should have been named Pit), Simon Belmont from Castlevania, and later Game Boy. Kevin/Captain N and the gang would defend Videoland from Mother Brain and her henchmen, who included King Hippo from Punch-Out!!! and The Eggplant Wizard from Kid Icarus. Other frequently occurring villains were Dr. Wily of Mega Man fame (who was probably the only semi-competent villain in the entire series) and a Large Ham version of Dracula from Castlevania.

Many of the characters were nothing like their original counterparts. It cultivated a cult following anyway, likely based on the premise and the strength of Nintendo's following at the time. It also was notable for adding Link and Zelda, The Legend of Zelda cartoon series, as supporting cast members following the cancellation of Super Mario Bros Super Show.

For an extremely well done parody, see the Sprite Comic Captain SNES. See also the live action web series The New Adventures of Captain S, which pastiches the original with a Sega Genesis theme (and has a Goth Nintendo fan for an antagonist).

Tropes used in Captain N: The Game Master include:
Retrieved from "https://allthetropes.org/w/index.php?title=Captain_N:_The_Game_Master&oldid=1961834"
Categories:
Cookies help us deliver our services. By using our services, you agree to our use of cookies.