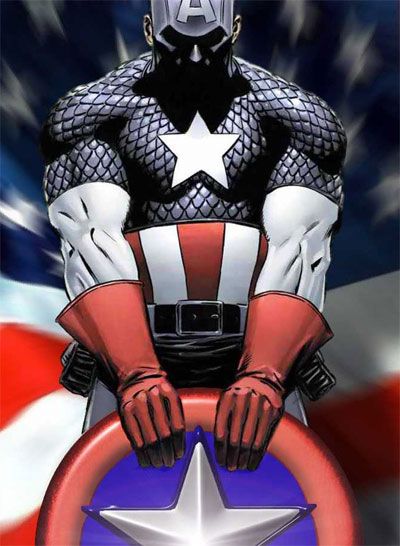 This Superhero is motivated by one thing above all: love of country. He loves everything it symbolizes, all its values, and is damn proud of its history.

He's heroic, maybe The Cape, and will normally follow Thou Shalt Not Kill. Unless it's war, then you can expect him to be on the front line, taking down as many of Those Wacky Nazis and Dirty Communists as he can. He is a master of the Rousing Speech or can give somebody a powerful Get a Hold of Yourself, Man! moment. If he becomes Older and Wiser, he will almost always end as The Mentor.

No matter how near the cynical end of Sliding Scale of Idealism Versus Cynicism the major premise is, he will be idealistic. In the Five-Man Band he is The Hero, on a Super Team or any other kind of super group he will be The Captain. He can be very harsh and strict - The Cowl may not get along with him. The Anti-Hero should not expect to see him among his fans. If you are a Nineties Anti-Hero, better stay the hell away from him if you don't want to get your butt kicked. On the other hand, he is respectful of true patriots, no matter what country they serve - he will quickly recognize that their patriotism is akin to his own. The same goes with dissenters with his government's policies and/or his nation's current public sentiments, if their ultimate principles are in keeping with the larger ideals he values. For instance, if a historical 1960s American Captain Patriotic heard growls accusing Martin Luther King Jr of being a traitor, he'd be first to answer, "No, he is a true American patriot!"

However, all Mad Generals, crooked politicians, Evil Presidents, and infiltrators from The Illuminati must remember that he's not loyal to government, law or army. He may serve them, but his true loyalty is to his country's spirit and ideals. Attack his values, use the symbols he values as a hypocritical excuse to commit injustice, or limit people's freedom with law, and he will be the first to kick you in the face.

Discovering that his country has fallen and become corrupt is the best way to cause his Heroic BSOD. This is temporary. You can be damn sure he will stand again to restore his fatherland to glory. In case he is forced to give up his costume and secret identity, he will join the army or the police, or adapt a similar superhero identity. He knows there are many ways to serve his country.

Plenty of them, but not all, are Captain Geographics. Just because they wear their country on their sleeves doesn't mean they're good guys. Daredevil's enemy Nuke, for instance, who has the flag tattooed on his head, is just a psycho who believes he's Captain Geographic and of course is no match for the real Captain America.

Note: Many of the Golden Age superheroes mentioned here, who have entered the public domain, have been repackaged in Tom Strong and Project Superpowers comics.

Examples of Captain Patriotic include:

Retrieved from "https://allthetropes.org/w/index.php?title=Captain_Patriotic&oldid=1835673"
Categories:
Cookies help us deliver our services. By using our services, you agree to our use of cookies.