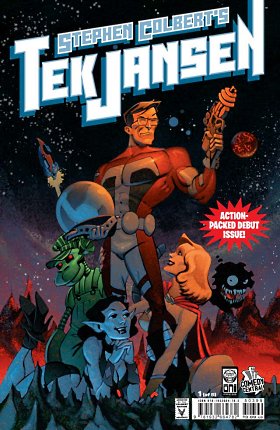 He's saved the Earth, fought galactic empires, and "obviously had hundreds of girlfriends".

In The Future, when mankind has explored the outer reaches of space, the forces of evil threaten our peace. But never fear, for humanity is under the stalwart protection of the parody hero of Space Operas and serials, known as Captain Space, Defender of Earth!

Yes, his origins make him a Dead Unicorn Trope, based more on Captain Kirk and Adam West's portrayal of Batman than of the old Flash Gordon or Buck Rogers stories, but that does not stand in the way of his quest For Great Justice! Okay, it might, but even if he is an arrogant Jerkass (meant to mock the old values, or what we think they were), that won't stop people from admiring him due to his deep, manly voice, larger than life mannerisms, dedication to truth and justice, and some of his trusty gadgets (Ray Gun mandatory).

When our hero actually is heroic, although sometimes an Idiot Hero, he leads the fight to stop Death Rays, alien armadas, Space Pirates, and Evil Overlords from destroying The Federation! Furthermore, he does not need to do this alone, as he is always accompanied by a Girl Friday, a Ragtag Bunch of Misfits, or an Eager Young Space Cadet, who may also be parodies of their respective archetypes of the true saviors of the day!

In animation our hero is often drawn with an exaggerated chin, a top-heavy body, to show off his space manliness!

And to think that Captain Proton of Star Trek: Voyager was a more accurate portrayal of the old serials than this Trope!

Compare The Cape (trope), The Ace, Raygun Gothic, Captain Superhero (which this can overlap if a character is a space hero and a superhero), For Great Justice, Space X.

Examples of Captain Space, Defender of Earth! include: