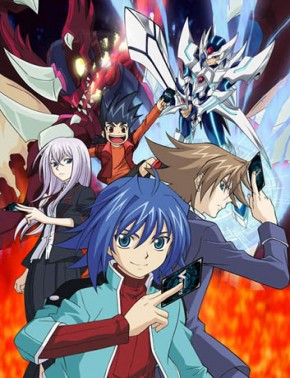 Aichi Sendou is an Ordinary Middle School Student who owns one of the most powerful cards: Blaster Blade. He then meets Toshiki Kai who challenges him to a game of cards. He doesn't know how to play, but he did collect Vanguard cards. Thanks to Vanguard, he now finds himself making friends.

The anime, originally scheduled for a 65-episode run, is now airing its second season.

There are also two manga series both published by Kadokawa Shoten: one in Comp Ace and another in Kerokero Ace.

Tropes used in Cardfight!! Vanguard include:
Retrieved from "https://allthetropes.org/w/index.php?title=Cardfight!!_Vanguard&oldid=1957339"
Categories:
Cookies help us deliver our services. By using our services, you agree to our use of cookies.