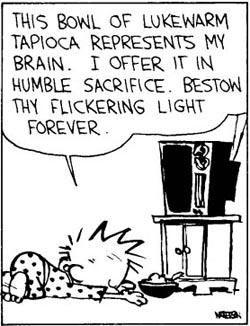 Cargo Cult is the trope when a group of people worship an object as Gods or deities. This usually happens either because of its advanced technology, or a coincidental resemblance to figures in the local religion.

The trope name comes from the documented effect that World War II military forces had upon natives of various South Pacific islands. Seventy years after the war, some tribes in Vanuatu are still building elaborate fake airfields and praying to idols shaped like DC-3 cargo planes.

There is a mythical character they call "John Frum", who they believe to be the source or harbinger of their prosperity (some anthropologists think this may have been the result of American soldiers introducing themselves as "John, from [America]"). Interestingly, it has helped prevent many older traditions of the islanders being wiped out by conversion to Christianity.

Many Cargo Cults are distinguished by a mixture of native spiritual systems with elaborate economic rituals, as capitalism has come to replace military power as the force of the developed world that is most heavily felt and appreciated in daily life. Such rituals similarly have the aim of appropriating what the natives perceive as the westerner's "power" from his symbols, such as money or materials in addition to technology.

Note: This trope is for objects being worshiped. If characters pretend to be, or are just mistaken for gods, the trope is God Guise.

Examples of Cargo Cult include:

Fry: You guys worship an unexploded nuclear bomb?!
Vyolet: Yeah, but nobody's that observant. It's mainly a Christmas and Easter thing.