Everything About Fiction You Never Wanted to Know.
(Redirected from Cargo Shipping)
Jump to navigation Jump to search 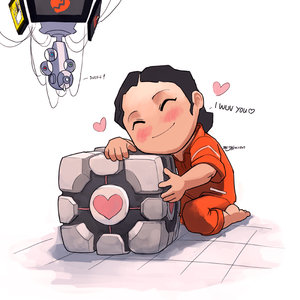 "Gentlemen...behold! I have made love to this machine! And now, upon retrospect, I ask why?"
—Dr. Weird (while gesturing to a lawnmower), Aqua Teen Hunger Force

"Wow, Bender, are you and the ship an item? I mean, I know you're both items, but how can you date a ship anyway? It'd be like me dating a really fat lady, and living inside her, and she'd be all like: *makes airplane noises*"
—Philip J. Fry, Love and Rocket

Shipping where one or both of the partners is an inanimate object—becoming, in effect, a Companion Cube. A common type of Crack Pairing in fandom. To some, this kind of shipping is made of Squick; to others, it's Serious Business.

Semi-justifiable if the object in question is an Empathic Weapon.

Compare Robo Ship, when part of the pairing is a sentient machine. Also, compare Cargo Envy, where someone else wishes they were the object in question. See also Perverse Sexual Lust (which is the real person-to-fictional character version) and I Call It "Vera".

Not to confuse with Cargo Cult.

Important note: Only list very common and popular examples on this page. Also, though we've said it elsewhere, do not Pothole work titles, and do not add responses to what has already been written.

Examples of Cargo Ship include:

Leona: I can't help it. It's the feeling of cold metal. It makes me all tingly.

Preacher: Let us not lead to judgement, Dear Lord, but if it appeareth that my fellow policeperson haveth an unnatural affair with her tank, forgive her. Amen.

Erika: Speaking of which, there had been a shitstorm just recently about which one is the OTP between CD x DVD or DVD x CD...

My city, I cannot deny her. My city screams. She is my mother. She is my lover, and I am her Spirit.

Scotty: So the Enterprise has had her maiden voyage, has she? I'd like to get my hands on her "ample nacelles", if you'll pardon the engineering parlance...

Scotty: She is one well-endowed lady! I'd like to get my hands on her ample nacelles, if you'll pardon the engineering parlance.

"If you don't tamp down your physical desires boys, you could go insane and find yourself copulating with the coin return of a vending machine." (Bright side: Free Kit Kat)

She came all wrapped in cardboard, all pink and shrivelled down
A breath of air was all she needed to make her lose that frown
I took her to the bedroom and pumped her with some life
And later in a moment that girl became my wife

I once had a dirty weekend in Hampstead with a ball of twine...it wanted to marry me, but I refused to be tied down!

Alice: Do you realize how lucky you are having a beautiful home, two wonderful children...
Phil: And you, you beautiful dove you. You lovely thing. I'd never thought I'd live to see the day when anything so gorgeous as you would belong to me.
Alice: Well, thank you Phil...
Phil: Alice, please, I'm talking to the car.

Speed: ...you, being in love, cannot see to put on your hose.
Valentine: Belike, boy, then, you are in love; for last morning you could not see to wipe my shoes.
Speed: True, sir; I was in love with my bed: I thank you, you swinged me for my love, which makes me the bolder to chide you for yours.

"Say, you got a girlfriend? Well, what if your girlfriend was a wooden spoon and an orange plastic bowl? That'd be really weird, man. What kind of screwed-up kid are you? We don't recruit your kind! Get out of here!"

"I'm a man, and you're janitorial equipment."

"My love has wings, slender feathered things with grace and upswept curve and tapered tip."