Everything About Fiction You Never Wanted to Know.
(Redirected from Carl Squared)
Jump to navigation Jump to search 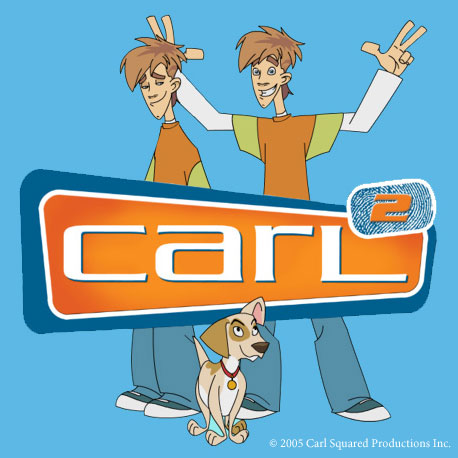 Carl² is a Canadian animated series targeting youths of all ages. This show explores what would happen if a teen had a clone. The concept of the cartoon is a mix of biological studies and a normal teen life.

Carl Crashman is a lazy 14-year-old who is good at only one thing: slacking. One day, he had a rough day and he was tired of doing things he hated all the time. While blogging on the Internet, he complained about his life. Hearing his request for a clone, an online cloning company sent Carl an exact clone of himself in a box. Carl named him Carl Squared or simply C2. Even if C2 looked like him, talked like him, and walked like him, C2 was more ambitious, hard working and charming, much to Carl's advantage. Since C2 arrived, Carl has been relaxing a lot more. However, C2 really always does something opposite to what Carl wants. Carl decided to keep C2 a secret from everyone else, except his best friend, Jamie James.

Tropes used in Carl² include:
Retrieved from "https://allthetropes.org/w/index.php?title=Carl²&oldid=1750767"
Categories: