Caroline in The City 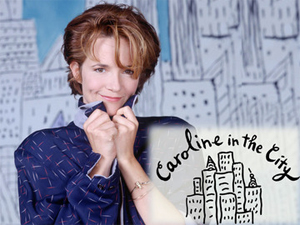 Though critics found the show mediocre, it had a loyal fanbase. It got very good ratings in its first season, largely thanks to being placed between Seinfeld and ER on the schedule. In its second season, it shifted to Tuesdays between Frasier and Dateline NBC and managed to hold its own.

Then NBC decided that Caroline was strong enough to carry a night of programming on its own and made the ill-conceived move of moving the show to Monday for its third season. Ratings fell, but the network still seemed to have faith in the show and renewed it for a fourth season, albeit with something of a Retool; the show's main setting was moved from Caroline's apartment to an office, and several new supporting characters were introduced. It proved to be a disaster. None of the new characters stuck around, the quality of the writing dropped sharply (one plot revolved around Charlie accidentally seeing Caroline naked, then spending the entire episode trying to "be even" by streaking in front of her), and ratings nosedived. At the end of the season, NBC finally put the show out of its misery.

Animated versions of Caroline's comic strip served as Book Ends, a gimmick that wasn't exploited nearly enough. Later, the same cartoonist would use the same style for paper towel commercials.

Tropes used in Caroline in The City include:

Caroline:”As the curtain descents, far to early on this brilliant career, we remember the artist, Richard Karinsky. Indicate my body.”(she realises her mistake) “…of work.”(she indicates his paintings)

Julia: When you're Italian, you're always late. Capisce.
Annie: Hey. I'm Italian, and I'm always on time.
Julia: Really? I do not recall where New Jersey lies in the boot of Italy.