Cartoon All-Stars to the Rescue 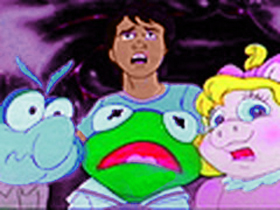 Hey kids! Do drugs and you'll get to see all your favorite cartoon stars!

A truly epic (which is to say, especially terrible) Very Special Episode that was originally simulcast commercial-free on Saturday morning, April 21, 1990, on all three major American television networks (FOX had only been on the air for three years at that point), along with most independent stations and several cable networks. Produced by the people who award the Emmys (and animated by Wang Film Productions and Southern Star Studios in Australia). Cartoon characters ranging from Looney Tunes to Teenage Mutant Ninja Turtles try to teach an at-risk teen called Mikey about the dangers of marijuana.

The special was relentlessly promoted in the days leading up to the simulcast. Interestingly, the anti-drug angle was underplayed in these commercials. Instead, the ads pushed the insane crossover among the various "All Stars", leading many kids to be filled with endless excitement that was only going to let them down. Admittedly, the fact that The Smurfs, Muppet Babies and DuckTales (1987) characters were going to be mixing it up together was truly life-changing for pre-teens. Frankly, whether the intended anti-drug message got through is a good question...

Extensive reviews of the special can be found here [dead link] and here. You can find the special in its entire 32 minute glory on Google video.

Tropes used in Cartoon All-Stars to the Rescue include:

Mikey: But I can still give up!
Bugs: Not if you're on drugs!