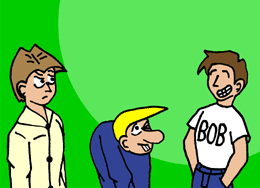 Bob was there, too.

Casey and Andy is a completed web comic by Andy Weir, about a pair of Mad Scientists and their wacky hijinks as they deal with their girlfriends, try to Take Over the World, kill each other (Repeatedly), play RPGs, annoy next door neighbour Jenn, test-drive their inventions and do battle with Andy's nemesis, Grover Cleveland. Bob was there, too.

It can be found right here. It was on Series Hiatus for a very long time, before Andy finally went back to conclude the final story arc, ending the series after 666 strips.

Andy Weir went on to write the highly acclaimed Science Fiction book The Martian. This is most certainly not that kind of story, and C&A may end up in Old Shame territory for the author. But really, the comic is quite good; you should try it.

Bob was there, too.

Retrieved from "https://allthetropes.org/w/index.php?title=Casey_and_Andy&oldid=1854802"
Categories:
Cookies help us deliver our services. By using our services, you agree to our use of cookies.