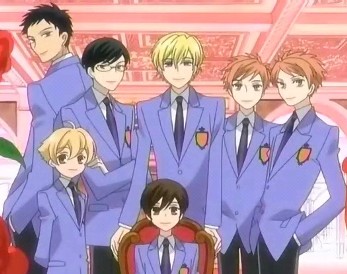 Even the girl[1] gets in on the manpretty.

An array of pretty people as eye candy isn't just for the guys. Girls get their Cast Full of Pretty Boys to ogle too in the name of Fan Service. This tends to be less noticeable than its female counterpart because exclusively (or near-exclusively) male casts are already common and expected (thought not always with the intentional appeal to females) and the fanservice tends to be along the lines of "he cooks" or "naked chest" and is never as sexual or objectifying as fanservice in normal male-oriented shows, unless there are Yaoi Guys involved. The writers sometimes leave it to their audience to retrofit the standard group of friends into the Unwanted Harem if they wish.

Some series of this flavor go the reverse harem route and have an ordinary female lead among the Pretty Boys as an audience surrogate, although the girly Keet type can be used this way too.

Sometimes these stories have their own version of Those Two Guys. One will be a 'normal' audience surrogate and thus a young (but non-threatening) girl. Another will be a more 'ideal' woman, often a clever, sexy, and mature lady who barely fits into her dress.

Examples of Cast Full of Pretty Boys include:

Retrieved from "https://allthetropes.org/w/index.php?title=Cast_Full_of_Pretty_Boys&oldid=1632512"
Categories:
Cookies help us deliver our services. By using our services, you agree to our use of cookies.