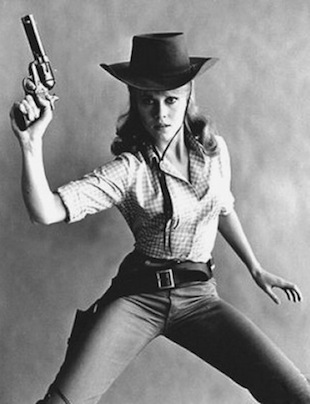 Where did she go wrong?

Catherine “Cat” Ballou (Jane Fonda), an aspiring schoolteacher, is traveling home by train to Wolf City, Wyoming, to see her rancher father, Frankie Ballou (John Marley). While en route she unwittingly helps accused cattle rustler Clay Boone (Michael Callan) escape the sheriff (Bruce Cabot), when Boone's Uncle Jed (Dwayne Hickman), a drunkard disguised as a preacher, distracts the lawman. She reaches the ranch to find that the Wolf City Development Corporation is trying to take the ranch away from her father, whose only defender is an educated young Indian boy, Jackson Two-Bears (Tom Nardini). Clay and Jed appear and are talked into reluctantly helping Catherine. She also sends a letter and $50 to legendary gunfighter Kid Shelleen (Lee Marvin) to hire him to come and help protect her father from fast-drawing Tim Strawn (also Marvin), alias Silvernose, the hired killer who is threatening Frankie.

Shelleen arrives, a drunken stumble-bum who is literally unable to hit the broad side of a barn when he shoots and whose pants fall down when he draws his gun. Strawn kills Frankie, and when the townspeople refuse to bring him to justice, Catherine becomes the outlaw Cat Ballou and vows to take revenge on the town and on Wolf City Development. She and her four gang members rob a train carrying the Wolf City payroll, and Shelleen, inspired by his love for Cat (unrequited because she loves Clay), drys out, shapes up and again looking and acting like the legendary gunfighter he was, finds and kills Strawn (off screen)in a gunfight. Later he casually reveals that Strawn was his brother.

Cat posing as a “soiled dove”, confronts town boss and head of Wolf City Development, Sir Harry Percival (Reginald Denny). A struggle ensues, Sir Harry is killed, and Cat is sentenced to be hanged on the gallows. Shellen falls off the wagon and as Cat is led up the gallows stairs he sits on his horse (who looks as drunk as his rider!) as both lean against a building.

Just after the noose is placed around her neck, Uncle Jed (again as a fake preacher) cuts the rope as she falls through the trapdoor. Shellen drunkenly shoots up the town as her gang then spirits her away in a daring rescue. Close credits with the gang happily riding away as drunken Kid Shellen tries desperately to stay on his horse.

Tropes used in Cat Ballou include:
Retrieved from "https://allthetropes.org/w/index.php?title=Cat_Ballou&oldid=1231346"
Categories: