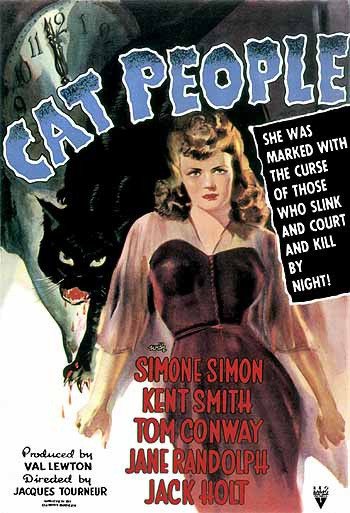 In this movie, pussy eats you!

Classic 1942 horror film produced by Val Lewton concerning Irena, a Serbian woman living in America who believes that if she is ever kissed by a man, she will transform into a deadly panther. Her American co-workers try to persuade her otherwise, including a man who wants to marry her. Turns out, she's right and they're wrong. Despite some wooden acting, a low budget and rather primitive special effects, Cat People remains an effectively spooky (if not quite scary) film to this day, largely because of director Jacques Tourneur's use of visual and psychological suggestion to encourage the audience to imagine what might be lurking in the shadows.

Spawned a sequel (kind of), The Curse of the Cat People, which follows two of the characters from the first film and (apparently) a third one who had seemed to be dead at its end; it didn't really deal with the "cat people" angle at all, and dropped the "dangerous sexuality" theme in favor of exploring the importance of childhood imagination. It's not even in the same genre as the original, being more of a drama about family life than a horror film. That said, it's well made and worth seeing in its own right.

There was also a 1982 remake directed by Paul Schrader and starring Malcolm McDowell and Natassja Kinski; it was a great deal bloodier and more salacious than the original, expanded the original's sketchy backstory into a proper origin story for the cat people, and generally preferred to show what the original merely suggested. It's also very... very... slooooow.

Tropes used in Cat People (film) include:
Retrieved from "https://allthetropes.org/w/index.php?title=Cat_People_(film)&oldid=1612791"
Categories:
Cookies help us deliver our services. By using our services, you agree to our use of cookies.