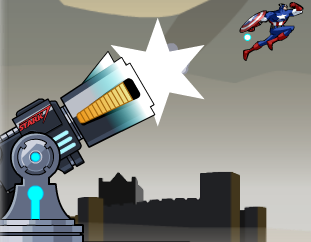 Who knew The Avengers would make such great projectiles?

When Siege Engines are loaded with people rather than rocks/diseased animals/plague victims. Usually in the context of a siege, so as to get attackers on a walltop quickly, or to give particularly tough characters a Dynamic Entry. See also Fastball Special, Abnormal Ammo.

Title comes from a Darwin Award (that isn't about this, but a Tree Buchet-induced death).

Examples of Catapult to Glory include:

In Deadpool, Negasonic Teenage Warhead propels Deadpool to the top of an abandoned SHIELD helicarrier by exploding underneath a scrap of armor on which he is laying.

Retrieved from "https://allthetropes.org/w/index.php?title=Catapult_to_Glory&oldid=1771591"
Categories:
Cookies help us deliver our services. By using our services, you agree to our use of cookies.