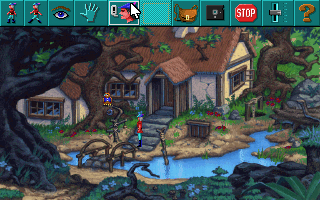 Enter command or click item to go to the next Trope.

A game genre characterized by puzzle-solving, exploration, and narrative, and a relative (or total) absence of randomized combat.

Adventure games are among the earliest video game genres. Their line descends from the original Colossal Cave game (also known colloquially as ADVENTURE), written by Will Crowther and Don Woods in the 1970s, based on the Mammoth Cave system in Kentucky, and its immediate successor, Dungeon, which was later marketed commercially as the Zork trilogy.

Adventure games remained one of the dominant genres throughout the 1980s until the mid-90s, as they tended to be far less demanding on computer resources than their action-oriented brethren. Sierra and LucasArts became the big players in graphical adventure games. Infocom, on the other hand, was the dominant force for textual adventure games, which they marketed as "Interactive Fiction", which has now become the term for that genre.

That's because, ironic to the name, Adventure Games are not about action, and as such, are not what non-gamers might think of as "adventures" in the way that adventure movies or books are often full of action, chases and danger. In fact, Adventure Games are some of the slowest-paced games around, being more focused on story, exploration, suspense, dialogue and puzzle-solving, leading to some criticism of the use of the word "adventure". The upside is that they may consume as many hours of play as a Wide Open Sandbox, but with a script that leaves the player wondering "what happens next" if they can get past this obstacle. Compare, say, the adventures in the Indiana Jones movies to The Fate Of Atlantis, which feels like an extended roleplay of an Indiana Jones movie, and then to Uncharted, which feels like an arcade simulation of an Indiana Jones movie. The former is a Point and Click Adventure Game. The latter is an Action Adventure. Two very different genres.

The genre has had a decent revival on the Nintendo DS starting with the ports of the Ace Attorney series, as its touchscreen allows for an ideal point-and-click interface, and the fanbase includes many older players who favour puzzle and problem-solving games. As well, smaller companies like The Adventure Company and Telltale Games have done well in specializing in adventure games; indeed, the latter has revitalized the Sam and Max Freelance Police franchise and recently began a new Monkey Island series. And there is, of course, the whole Independent Adventure Games scene where small-time developers (often one-man teams) are able to keep themselves running by distributing their games to cult-followings.

Because Adventure Games are story-based, what they lack in body-count they can make up for with suspense. Indeed, the primary death toll in such a game is You. The typical Adventure Game is framed around an elaborate, even novelistic plot which the player must proceed through by trying to get information out of non-player characters and collect any items you come across that May Help You On Your Quest. (These are all Adventure Game tropes, by the way.)

In addition to their own peculiar tropes, Adventure Games, perhaps more than any other video game genre, borrow from the tropes of television and film media.

Probably the most famous Adventure game of all time is the Zork trilogy, and -- of course -- Colossal Cave Adventure, which was the prototypical "Adventure game".

There are six major "schools":

Interactive Fiction is usually defined as an adventure game which is primarily textual (though there is much debate over the exact scope of the term; some think it should refer only to purely textual games, while others, preferring to take the words "interactive" and "fiction" literally, think the term should encompass a superset of those games typically called "Adventure". The term Text Adventure is less ambiguous, but also less popular). For instance, MUDs and other text games are based on RPG principles, and thus fall outside the category. More than any other school of Adventure (and, indeed, more than most other videogame genres), Interactive Fiction has a large hobbyist community, with as many as a hundred new games produced each year. Examples: Zork, A Mind Forever Voyaging, Jigsaw, and Photopia.

Sometimes called "2D" or "point-and-click", is the format used for most graphical games of the golden age. Somewhat similar to a Platform Game visually, these use pre-drawn backgrounds, with limited animation, often using watercolors, although pre-1992 graphics were cartoonish in style. The playfields actually are three-dimensional, viewed from a fixed perspective. These games are rendered in the third person, with the player character's Digital Avatar as a sprite in the world. Aficionados often further break this genre down by the style of the user interface. Three popular styles include the "icon bar" (which has a button bar of possible actions above or below the main viewport), the "verb list" (where a list of actions relevant to the current scene appears below the viewport), and the "verb coin" (where possible actions upon a specific object appeared, usually laid out radially around the object when clicked -- see The Sims for a modern version). Earlier games were often assisted by a Text Parser, while later ones often removed the notion of "verbs" altogether, reducing a click on an object to "do the obvious thing to this object". Examples: King's Quest, Monkey Island, Gabriel Knight, and Ozzie And The Quantum Playwrite.

Also called Myst-clones or 2½D, present prerendered 3D environments from a first-person perspective. Early examples tended to have the feel of interactive slideshows (this is a fair comparison: Myst was originally created on an early Macintosh slideshow program called Hypercard). Emphasis usually moved away from inventory management and toward "set-piece" puzzles involving the manipulation of a piece of machinery. The use of Full Motion Video in cutscenes became common for a time. Examples: The Journeyman Project, Myst, Shivers, and Zork: Grand Inquisitor.

Games which incorporate substantial or exclusive use of Full Motion Video and photorealistic images. While this seemed like a natural pairing, the cost and technology stood in the way of interactivity. By the time that it was feasible to do such games properly, the whole notion had left a bad taste in players' mouths. Examples: Phantasmagoria, Gabriel Knight 2, and The X-Files. Other examples of this are the 1998 Visual Novel Yarudora series, the 1998 Dancing Blade: Katte ni Momotenshi! series by Konami, and the 2005 Dating Sim School Days and its sequel Summer Days, which are essentially branching Anime movies, and the recent Fahrenheit/Fahrenheit (2005 video game), which even featured interactive action scenes through Quick Time Events.

With the 2010 revival of the "true" Adventure Game market, a number of nominal Web Comic artists and bloggers have been developing interactive, serialized adventure games released in daily doses over the Internet. These games usually have a loose plot moderated by their artist, but readers are encouraged to decide what happens next "turn" by writing suggestions in a specific comic format reminiscent of interactive fiction games. Live interaction with the writer/artist/moderator results in extinction of the dreaded "You can't use those two objects together" response.

(previous page) (next page)
Retrieved from "https://allthetropes.org/w/index.php?title=Category:Adventure_Game&oldid=1502098"
Categories:
Cookies help us deliver our services. By using our services, you agree to our use of cookies.