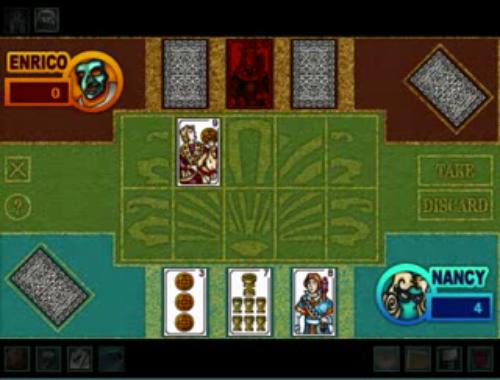 One of the classic genres of games. Card games are fairly simple: A series of cards with numbers, words, pictures or some other symbolism are dealt and then, either by yourself or with someone else, you pit the values of the cards against each other in what boils down in most games to basic math.

Playing cards originated in China as early as the 11th century and took the world by storm, making up the majority of modern games. When they came to Europe (via Arabic countries) in the late 14th century, the standard of 52 cards, with each of the four suits having cards numbered from 1 to 10 plus three court cards, had already been established. In Europe this system evolved in several directions (regional standards still exist in southern and central Europe). The de facto international standard of four suits most known today - hearts, diamonds, spades and clubs - appeared in 16th century France.

Other types of playing card decks are in use in Europe and Asia. These include French tarot, Italian tarot and Indian ganjifa. Mahjong may be considered a close cousin despite using tiles. The tarot deck, by the way, was originally (and still is) used for card games, and those games gave rise to the modern concept of a trump suit.

Then there are Collectible Card Games (CCGs). This genre combines the collectability of, for instance, baseball cards, with the mechanics of a card game. They generally have vivid artwork and complicated effects and strategies. Some take place in an original universe, and others are tie-ins to movies or TV series. Some are massively popular, with tournaments and thousands of cards.

Between these are "dedicated deck" card games, which use cards with illustrations to implement whatever game concept the designer had. Like Collectible Card Games, these often have rule text printed on the cards.

Pagat.com describes the rules for many card games around the world.

The following 69 pages are in this category, out of 69 total.

Retrieved from "https://allthetropes.org/w/index.php?title=Category:Card_Games&oldid=1957962"
Categories:
Cookies help us deliver our services. By using our services, you agree to our use of cookies.