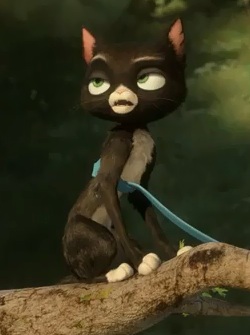 Many traits associated with cats, including cleverness and contemptuousness, (among others) tend also to be associated with Deadpan Snarkers—coming mainly from the association with cats as being aloof, unaffected, coming off as superior, and being associated with sense and grace. As such, it only makes sense that some works would have some cats be among their most sarcastic characters, whether as verbally-sarcastic talking cats or as Silent Snarkers. This could sometimes involve a cat as a Snarky Non-Human Sidekick.

Note that this trope isn't JUST about domestic cats, or even about cats that look like domestic cats either. It could apply to bigger cats as well.

Examples of Cats Are Snarkers include: