Caught the Heart on His Sleeve 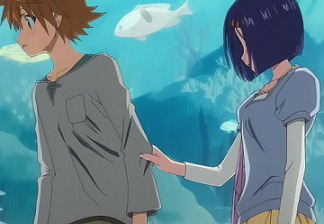 In many an Anime, The Protagonist (usually male) is left alone in a romantically charged situation with a Love Interest (usually female). When this happens, an awkward silence usually ensues, followed by the guy suggesting some banal activity to fill the time. He takes a step, only for the girl to grab his shirt sleeve, stopping him in his tracks. Indeed, we will often be treated to a several second pan over the motionless duo. The girl's eyes will likely be hidden as well. This often heralds a plot-significant, romantically related conversation.

The trope name is derived from the phrase, "(wearing a) heart on your/his/her sleeve," which means to display one's emotions and feelings openly, despite acting contrary to it. An example of this is not being able to tell someone that they like him/her, even though everybody else (including the Love Interest) could see it already.

This isn't always romantic, and any character desperate for another not to leave may do this.

Related to Please Don't Leave Me. Don't confuse it with Security Cling. See also Standard Female Grab Area for when a heroine is subdued through a somewhat similar method.

Examples of Caught the Heart on His Sleeve include:

I nearly bumped into Nagato who was coming out from the kitchen. In Nagato's hands was a stack of small plates, with chopsticks and a tube of ground mustard on top.
"I am leaving. Sorry for intruding. See you."
I was about to walk off, when I sensed a tug as soft as a feather on my arm.
"..."
Nagato was pulling my sleeve with her fingers. The tug was very soft, just like how much force one might use to pick up a newborn baby hamster.

"Well if you're scared just go ahead and grab my arm, why don't ya? I'm sure it'll help get me in the mood."