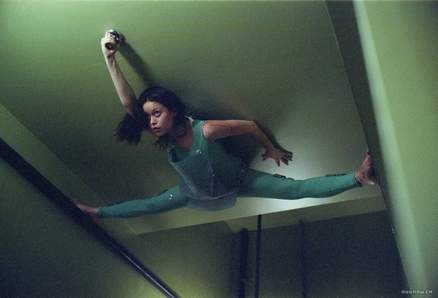 Ceiling River is watching you.

A character avoids pursuit or detection by hanging from the ceiling of the room or hallway. Thankfully, the upper reaches of the room have structures (walls, pipes, crossbeams, etc...) that are close enough for the hero to grab onto, even if they have to hold themselves up through sheer friction.

Luckily, nobody ever thinks to look up. The only sop to plausibility is our heredity: as walking animals we naturally focus on a horizon ring.

Sometimes the seeker is alerted to the hider's presence above by blood or sweat dripping to the floor.

If a monster is involved it may lead to Vertical Kidnapping, sometimes preceded by a Drool Hello.

See also: Acrophobic Bird, One-Dimensional Thinking, Object Ceiling Cling, He Was Right There All Along. Frequently used in conjunction with Fakeout Escape.

Examples of Ceiling Cling include:

Admit it; you looked up while reading this didn't you?

Retrieved from "https://allthetropes.org/w/index.php?title=Ceiling_Cling&oldid=1922618"
Categories:
Cookies help us deliver our services. By using our services, you agree to our use of cookies.