Everything About Fiction You Never Wanted to Know.
(Redirected from Celine Dion)
Jump to navigation Jump to search
/wiki/Céline Dioncreator 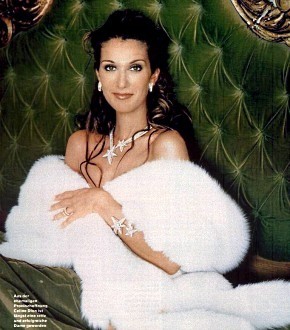 Céline Dion is one of the most popular Canandian singers of all time. Born in 1968 in Quebec, the Canadian province whose majority of populace speak French. Thus, she spent her early years speaking and singing French. Met her future husband, music manager René Angélil in 1981, who has been her manager for most of her career. Started singing English in 1990, but she sings in both French and English. She married René in 1994, had three sons and had been living happily despite their age difference. René Angélil died in January 2016.

Gained full mainstream attention (as well as a major Hatedom) when she sang "My Heart Will Go On" for the film Titanic.

Céline Dion provides examples of the following tropes:
Retrieved from "https://allthetropes.org/w/index.php?title=Céline_Dion&oldid=1745665"
Categories:
Cookies help us deliver our services. By using our services, you agree to our use of cookies.