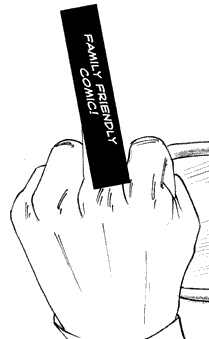 The Censor Box is used to cover up an offending sight with something that obviously doesn't belong, less physically part of the scene than any sort of fig leaf. Most typically, this is a heavy black bar or box, but sometimes bizarre stickers are used.

It's more glaringly obvious than Censor Steam or Pixellation, and such a brutal way of keeping something hidden from audiences that it's often used for parodies of censorship. There are plenty of subversions where the characters acknowledge it as if it was a physical object in their world. Conversely, Speech Bubble Censoring for two-in-one use.

Another, more recent, trend is to briefly place censor decals (often the program's logo or some mocking caption) over people's mouths when they say something that is bleeped out. This may be for the "benefit" of lip readers, or purely for added humor.

Examples of Censor Box include:

Retrieved from "https://allthetropes.org/w/index.php?title=Censor_Box&oldid=1853043"
Categories:
Cookies help us deliver our services. By using our services, you agree to our use of cookies.