Changing Clothes Is a Free Action 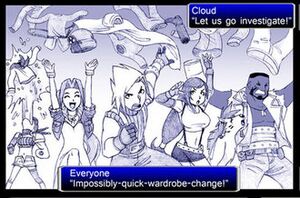 Vomiting your clothes is optional.

Some characters wear the same wardrobe through an entire adventure, getting it suitably burned and torn (or not at all) in the process. Then there's those blessed with living in an RPG, 'The Sims' world, Film or TV show where Changing Clothes Is A Free Action.

Say you've got a globetrotting heroine who's a Master of Disguise with an Unlimited Wardrobe in a Period Piece who loves dressing in the local couture. All she may need is ten seconds behind an object (or a backlit screen for extra points) to change clothes. Or perhaps a crew of adventurers who run through lots of Stuff Blowing Up and get tons of Clothing Damage, all amid breakneck action, scene and location changes. Yet in the midst of all that, the heroes will somehow find the time to change into something else that's equally impossibly cool.

In its most extreme form the characters will suddenly switch outfits from one scene to the next, with no indication (even a passing mention) of there having been time passing.

This is played literally in videogames where Your Reward Is Clothes. Usually you can change your character's clothes, armor, weapons and accessories in the blink of an eye. Though for balance issues the game probably won't let you switch outfits—or armor -- mid battle.

At least, not without spending the XP to buy that special Feat or Spell.

Instant Costume Change is the subtrope commonly used by Super Heroes in the typical "change out of my civvies into my spandex" phonebooth scene.

Instant Armor is another subtrope, when the costume change is motivated by a substential protective value.

Compare Flung Clothing and Convenient Color Change. See also Talking Is a Free Action for another action that can't be bothered to be restrained realistically by time. Closely related to Transformation Is a Free Action, as well as the Hyperspace Wardrobe. Can overlap with To the Batpole.

Examples of Changing Clothes Is a Free Action include:

Retrieved from "https://allthetropes.org/w/index.php?title=Changing_Clothes_Is_a_Free_Action&oldid=1867597"
Categories:
Cookies help us deliver our services. By using our services, you agree to our use of cookies.