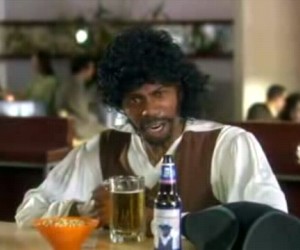 Everybody remembers that line and sometimes only that line but the show had way more to it than just that.

This Comedy Central sketch comedy show, starring comedian-turned-actor Dave Chappelle, in two (or two-and-a-half) short seasons, spawned a slew of catchphrases and became the poster boy for Too Good to Last, as behind the scenes Executive Meddling and Chappelle's Fan Dumb-induced Creator Breakdown ended up causing him to stop production of the show shortly after filming of season three began.

A stealth hit (Chappelle joked in a season two promo that the show was only renewed because Comedy Central needed a show to fill in time on the schedule until Reno 911! came back), the series came into its own with its second season. The show became a massive ratings and critical hit. As such, there was much hype and anticipation for the show's third season as Dave signed a massive contract with Comedy Central that granted him a large paycheck and a considerable cut of DVD sales for the show.

Then things changed, as it was reported that Chappelle went missing after filming three episodes worth of sketches for his show, ultimately resurfacing in South Africa, while the Season Three premiere date came and went with no show in sight. As fans would find out, Dave Chappelle had become disillusioned with fame and the show: his edgy, in-your-face racial humor was being taken at face value by his now predominately white fanbase, culminating in him coming to the conclusion that he had become the very thing he was mocking with his racially charged material. Adding to this was Comedy Central, who had given the show free rein for Seasons One and Two, suddenly sticking their noses into the production of the program and Chappelle falling out with his longtime friends/fellow writers who were more concerned with keeping the gravy train running than with his existential crisis.

At least that's the way Dave tells it. Neal Brennan, Dave's partner and co-creator of Chappelle's Show, was very angry about the whole matter and spoke out publicly against Dave.

Chappelle ultimately vanished from the set and refused to continue production with the show despite receiving a massive contract for the third season. While negotiations for his return were in the works, it became obvious that he was in no hurry to return to TV.

Comedy Central, tired of waiting, ultimately aired the filmed sketches as "the Lost Episodes" with introductions from Chappelle's co-stars. This did not go over well with Dave, who disliked the sketches he filmed and did not want them to see the light of day. As such, the series is dead (although Dave has said he might bring it back if he's allowed a massive retool).

Tropes used in Chappelle's Show include:

Dave: (recovering from hysterics) Apparently, shooting a slave master is only funny to me and Neal; if I could, I'd do it every episode!

Ice T: Next motherfucker that interrupts me is gettin' shot. Please believe that.

"When he joined the group, I heard mad cats like, 'Yo, Shalamar got a new girl in there, man, that bitch fine like a motherfucker.' They was talking about Micki Free, man, okay? Micki Free is not a girl."

Dave: And you know what the most dope thing about "skeet" is? White people don't know what it means yet. When they figure it out, they're going to be like, "My God, what have we done?"

"NO I CAN'T STOP YELLING, CAUSE THAT'S HOW I TALK! HAVEN'T YOU EVER SEEN MY MOVIES?! JUICE?! THAT WAS A GOOD ONE! DEEP BLUE SEA?! THEY ATE ME, A FUCKING SHARK ATE ME! DRINK, BITCH! JURASSIC PARK?!"

Host!Dave: Somehow, that is correct!

Rick James: I mean, can you imagine two grown men doing this?... Cocaine is a hell of a drug.

Charlie: [while playing basketball] Hey Prince, man, you got a towel? It's kinda hot out here.
Prince: Why don't you purify yourself, in the waters of Lake Minnetonka?

"He tried to kill my father, man... THE NIGGA TRIED TO KILL MY FAAATHER!"