Everything About Fiction You Never Wanted to Know.
(Redirected from Characters/Batgirl)
Jump to navigation Jump to search

Batgirl is one of a number of characters acting as a Distaff Counterpart to Batman and/or Robin. The character has served as an ensemble and background character in numerous Bat-titles and has also independently starred in three self-titled series. The first series featured Cassandra Cain, the second "official" Batgirl, the second ongoing series featured Stephanie Brown, formerly known as the Spoiler, and the third series features Barbara Gordon, the original woman to bear the title. Batgirl has also headlined two miniseries, the 2008 series with Cassandra Cain and an origin series, Batgirl: Year One, starring Barbara Gordon.

Comics titled Batgirl have their own pages:

The various women to use the identity and name of Batgirl are (In Chronological Order):

The first Bat-Girl (note the hyphen, not used by any other Batgirl) was Betty Kane, debuting in Batman #139 (April, 1961). She was the niece of Kathy "Batwoman" Kane, a Distaff Counterpart to Batman who'd been introduced in 1956 as a Love Interest for the Dark Knight to ward off perceptions of Ho Yay. Betty was the counterpart to Robin, gaining a (mostly one-sided) crush on Dick Grayson and his alter ego. She joined her aunt in fighting crime. Robin did not appreciate his counterpart, regarding her with a mixture of disinterest and distaste.

Batwoman and Bat-Girl were summarily dumped from the Bat-titles in 1964 as part of the new editor's cutting away some of the high silliness that had accumulated during The Interregnum. Years later, when Dick Grayson had become Nightwing, "Bette" Kane showed up in the Teen Titans series as Flamebird, a part-time costumed heroine with a crush on him. She's popped up every so often for brief appearances with the Titans, but avoiding a deep look at her continuity. Recently, the Interregnum-era stories have been brought back into continuity, albeit with the more outlandish ones being retconned into hallucinations that Bruce had during an exceptionally troubling phase in his life. The original Batwoman and Bat-Girl in particular have been confirmed as having been real.

Tropes exhibited by the Betty Kane Bat-Girl include: 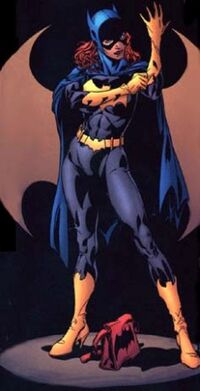 By 1966 the Batman live action television show was on the air, and the producer asked DC Comics to create a new female hero character for the comics that would then also appear on the show to boost viewership by women. The new character debuted in Detective Comics #359 (January, 1967). The new Batgirl was Barbara Gordon, the adult daughter of Batman's ally Commissioner James Gordon. She had a doctorate in library science and was the head librarian of Gotham Library, in addition to being a skilled acrobat with judo training. Barbara was blessed with an eidetic memory and a gift for invention (or adapting available technology) as she designed and built all of her gadgets independently of Batman. Why would a woman with all that going for her name herself "-girl"? It was still The Sixties.

In story, Barbara Gordon had created a "Batgirl" costume for herself to go to a masquerade ball, showing her personality by spending the time and effort to make it fully workable as a crimefighting outfit as well as a costume party winner. On the way to the party, Barbara saw a crime in progress by Killer Moth, and wound up helping Batman and Robin solve the case after an initial misunderstanding or two. Thrilled by the adventure, Batgirl opted to take up heroing full time.

Unlike her predecessors, who were seen as a distraction or annoyance by the Dynamic Duo, and were never allowed to tackle cases by themselves, Batgirl was treated as an almost-equal by Batman, and mostly worked on solo adventures in a Detective Comics backup feature. This both reflected the effects of the Women's Liberation movement of the time and was appreciated by them. Eventually, Barbara Gordon was elected to Congress and became a part-time costumed heroine operating in Washington, D.C. She continued to guest star in other series and had a recurring feature in the short-lived Batman Family series.

But by the late 1980s, interest in the character had waned, and Barbara Gordon was shot and crippled by the Joker in The Killing Joke in hope of pushing her father over the edge. There was a final Batgirl Special explaining that she'd officially retired from superheroing sometime before that event. However, this traumatic event energized Barbara's fanbase, including some of DC's creators.

A mysterious hacker and information broker named "Oracle" began appearing in Suicide Squad, eventually revealed to be the now wheelchair-bound Barbara Gordon, who refused to let her crippling injuries keep her down. Oracle quickly became a formidable force in the DC Universe, although her most memorable accomplishment was creating the Birds of Prey hero agency.

Many adaptations of the Batman material have made Barbara much younger at the time she became Batgirl, and much more Batman's sidekick.

Tropes exhibited by the Barbara Gordon Batgirl include:

Helena Bertinelli, better known as the Huntress, briefly took up the Batgirl mantle during the Batman: No Man's Land event (1999). She first appeared in this role in Shadow of the Bat #83 (March, 1999). Batman eventually forced her to stop using the costume as he felt Helena's attitude and behavior were inconsistent with his standards. She went back to being the Huntress, and later joined the Birds of Prey.

Tropes exhibited by the Helena Bertinelli Batgirl include: 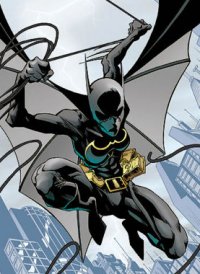 A character introduced in No Man's Land in 1999, Cassandra Cain became Batgirl with the assistance of Oracle and Batman. Cassandra first appeared in Batman #567 (July, 1999).

In her backstory, Cassandra was raised by her father, notorious assassin David Cain, to have body language as her "native tongue," allowing her to read people's movements and emotions from the tiniest of clues. With the addition of constant martial arts training, Cain hoped to turn Cassandra into a superhuman assassin. The training had the side effect of making Cassandra unable to understand spoken or written language. However, when Cain had Cassandra kill a human being for the first time she read the victim's dying agonies and understood on a primal level what death was, and silently vowed never to kill again, escaping from her father.

Cassandra Cain was the first Batgirl to get her own continuing solo title, which run for 74 issues (April, 2000 - April, 2006). The first major arc of which had her confront a psychic who "rewires" her brain to understand spoken language so that he can communicate with her more effectively. Unfortunately for Cassandra, this also shut off her ability to read body language, her one real advantage over most of her opponents. The second arc of the series had her relearn this skill with the help of Lady Shiva, who later was revealed to be Cassandra's mother, unknown to her at the time. Even once Cassandra was able to understand verbal language, she had difficulty learning to speak and more difficulty with reading.

While the Batgirl title was a decent seller, it was not quite up to Bat-family levels and it was decided to end the series. A lot of rumors on the internet say this decision was meant to clear the way for the new Kate Kane Batwoman, who DC planned to make a major push on in conjuction with the 52 series, but this has yet to receive any sort of official confirmation. The character was not in limbo long, as Executive Meddling made Cassandra the new villain of the Robin series, with nearly a one hundred eighty degree turn in her characterization, skillset and competency. This did not go over at all well with the fans, among the strongest reactions being the creation of Cass Toons.

Eventually, it was revealed that Cassandra's new personality was the result of being drugged by Deathstroke, which was either an Author's Saving Throw or Voodoo Shark, depending on how willing a given reader was to swallow it. A new Batgirl miniseries was put out to try to justify the changes and cement her Heel Face Turn, but it was written by the same author as the much-despised Robin plotline, and did not sell well.

Despite reestablishing her as a hero, DC decided to separate Cassandra from the Batgirl persona and had her renounce the identity in the first issue of a new ongoing series, replaced by Stephanie Brown (See below). DC then declared that 2010 was a "big year" for Cassandra, but fans have called Lying Creator since her only appearance was in Red Robin #17 as a crime fighter in Hong Kong. In this comic Tim gave her back her old costume and said that he hopes she will wear the symbol. Gail Simone had said that she would appear in Birds of Prey, but unfortunately this was not able to happen despite her efforts, once again leaving fans gnashing their teeth. It was later revealed that Cassandra was barred from appearing in Birds of Prey due to her being used in Red Robin and the upcoming Batman: Gates of Gotham mini-series, which of course caused the fandom to cautiously rejoice once again. Fans were cautiously optimistic that this means she will play an active role in the upcoming Batman: Incorporated by Grant Morrison. As of issue #6, Cassandra is now an agent of Batman Inc. under the new identity of Blackbat. The miniseries "Batman: Gates of Gotham" established that she'd "always liked it" in Gotham, implying that she'd be moving back, but absolutely no sign of her has been glimpsed in the New 52.

A quick side note: Cassandra briefly took on another identity, Kasumi, in the Justice League Elite title.

Tropes exhibited by the Cassandra Cain Batgirl include:

About the same time as Cassandra Cain's Face Heel Turn, a new "Batgirl" was seen in Gotham City in the Birds of Prey arc "Headhunt". First appearing in Birds of Prey #96 (September, 2006). Upon closer examination, this turned out to be a teenager named Charlotte Gage-Radcliffe, who had inherent superpowers, including teleportation. Barbara Gordon tries to straighten the young lady out by stressing the dangers of a poorly-trained hero fighting crime (including showing what turn out to be faked autopsy photos of Stephanie "Spoiler" Brown). Charlotte gave up the Batgirl identity, but then adopted the codename "Misfit" and Oracle was forced to start training the girl for her own and everyone else's safety.

Tropes exhibited by the Charlotte Gage-Radcliffe Batgirl include: 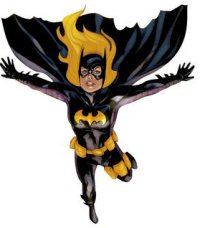 As of October, 2009, a new Batgirl series started with a new Batgirl: Stephanie Brown, aka Spoiler and Robin IV. As shown in the first issue, Cassandra Cain has retired as Batgirl (but the author says she's not out of the picture...oops, now she is because DC has "big plans for her"...) and Stephanie decides to use the costume instead. Barbara Gordon finds out about this and at first tries to stop her, but after seeing a demonstration of her bravery vows to guide and help her. The series is Lighter and Softer than many of the other Bat-related titles currently being published by DC, but is an embodiment of the Tropes Are Not Bad ideal: Its upright and cheerful protagonist still faces the same horrors and challenges facing any hero, but perseveres without ever losing her positive outlook.

Early reports stated that Stephanie would be Spoiler post-reboot, but she has yet to appear in actual continuity. This originated from an attempt to fit Grant Morrison's "Batman: Leviathan Strikes!" into the New 52 continuity, but this got to be too complicated. They finally said "screw it," set the story in pre-Flashpoint continuity, and kept Stephanie as Batgirl for the duration.

For tropes on the series itself see here

FOOTNOTE: For those of you trying to keep track, that's four Batgirls that "count" (Bette, Babs, Cass and Steph) and two that don't (Huntress and Misfit).