Everything About Fiction You Never Wanted to Know.
(Redirected from Chars Counterattack)
Jump to navigation Jump to search 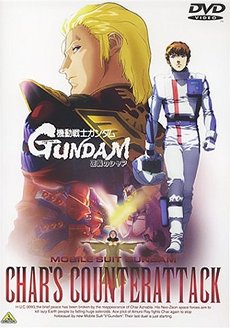 Mobile Suit Gundam: Char's Counterattack is an anime movie set in the primary Universal Century timeline of Gundam, taking place in UC 0093. Char's Counterattack is the final culmination of the original saga begun in Mobile Suit Gundam and continued through Zeta Gundam and Gundam ZZ, marking the final conflict of the fourteen year rivalry between Char Aznable and Amuro Ray, and the end of the Earth Federation/Zeon conflicts.

The year is Universal Century 0093. Five years have passed since the First Neo-Zeon War. The Federation has recovered from its defeat and has created a new anti-colonial special forces unit to deal with rebel forces: Londo Bell. Elsewhere in space Char Aznable re-appears out of self imposed hiding with a declaration that he now commands his own Neo-Zeon movement. Unlike movements of the past, Char intends to force the emigration of Earth's inhabitants to space by bringing about an ice age.

The movie is also noteworthy for having a rather unusual genesis. Originally, Yoshiyuki Tomino was going to wrap up Amuro and Char's storyline in Gundam ZZ, but mid-way through production he was given the go-ahead to make a movie, forcing ZZ' s plot to be rewritten (details on its trope page). Tomino's original write-up was a novel called Hi-Streamer, but Sunrise insisted on some changes, resulting in the film as it exists now. Tomino then wrote another novel, Beltorchika's Children, which draws mostly upon the movie but has lots of new content and a few important changes, such as replacing Chein Agi with Zeta Gundam's Beltorchika Irma. These two novels are the origin of the Hi-Nu Gundam (the finalized, "perfect" Nu Gundam) and Nightingale (a bigger, beefier Sazabi), which pop up in video games like Super Robot Wars and SD Gundam G Generation.

In 2014, a manga adaptation of Beltorchika's Children began serialization on Gundam Ace, which is still ongoing.

Tropes used in Mobile Suit Gundam: Char's Counterattack include:
Retrieved from "https://allthetropes.org/w/index.php?title=Mobile_Suit_Gundam:_Char%27s_Counterattack&oldid=1830551"
Categories:
Cookies help us deliver our services. By using our services, you agree to our use of cookies.