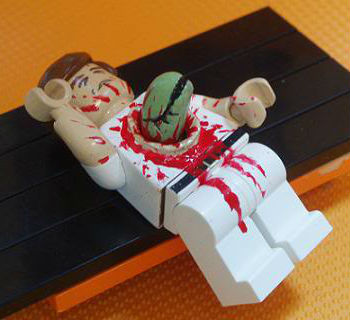 Leggo of my spleen!

Body Horror where an alien parasite or a Fetus Terrible within someone else decides it's about time to move out and find a body of its own. Often times, it does this in a fairly messy, painful and always fatal manner.

It can also often be a Painful Transformation along the way, before actually getting rid of the parasite, and the trope exists to be Nightmare Fuel.

Related to Orifice Evacuation (where the alien leaves not quite as violently), Orifice Invasion (where any alien wants in), Face Full of Alien Wingwong (how these alien pregnancies start), and Spawn Broodling (often the point of this).

Not to be confused with Chest Blaster or Chest Monster.

Examples of Chest Burster include: