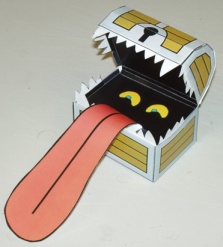 GET IN MAH BELLY!

Adventuring's hard enough—you've got Everything Trying to Kill You, brain-wracking puzzles, hazardous environments, and, if you're unlucky, the interface itself.

And now, the loot wants in on the action.

A Chest Monster is an enemy or hazard that has disguised itself to look like something positive: a power-up, an ally, a Save Point, or—in the archetypical example—a treasure chest. They are frequently called "mimics" for this reason, and are generally stronger (sometimes much stronger) in battle than the surrounding Mooks in the area. Sometimes they are ordinary chests with a monster locked inside. It may or may not be possible to escape from a Chest Monster once it's been disturbed—you either defeat it, or die trying.

Obviously, chest monsters aren't threatening at all if you can avoid triggering them in the first place, but in games that encourage you to always open every last treasure chest in sight, this is easier said than done. It may or may not be possible to identify a Chest Monster without opening it up and springing the trap—sometimes there may be a minor flaw or difference that allows you to tell them apart from the genuine article; sometimes you can use an item or ability to analyze it and tell if it's real. Other times the placement is a clue—if a power-up is right there in plain sight with no guards or obstacles protecting it, it might be a trap. Or not. If all else fails and there are no clues, you'll just have to find out the hard way and hope it doesn't bite back.

It makes you wonder; where did these things come from? Did a wizard make them, or have people in the D & D world been putting chests in dungeons so long mimics have had time to evolve to fill this niche?

Sometimes you will get something of value if you beat the Chest Monster. See also Inexplicable Treasure Chests, Inn Security, and Alluring Anglerfish.

Compare Poison Mushroom, which is a harmful item disguised as a beneficial one, and Wall Master, which is an enemy that hides in and/or disguises itself as the scenery.

Not to be confused with Chest Burster. Unrelated to Boob Bite, or a metaphor from the sixth Harry Potter novel. Has nothing to do with anyone's endowment.

This trope has a Wild Mass Guessing page.

Examples of Chest Monster are listed on these subpages: