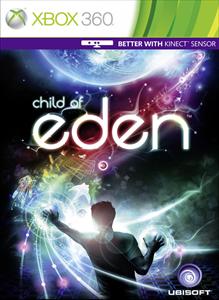 Child of Eden is a Rail Shooter with Rhythm Game elements developed by Q Entertainment and designed by Tetsuya Mizuguchi. It was released in June 2011 for the Xbox 360, and released for the Play Station 3 in September. It is the long-awaited Spiritual Successor to Rez.

On September 11, 2019, Lumi is given birth to aboard the International Space Station, making her the first ever human to be born in space. As she grows up, she dreams of coming to Earth, and expresses her desire through music down to the people of Earth. After she dies, Lumi is preserved and all of her memories are archived.

As the centuries progress, humanity makes great strides in space exploration, and builds a vast collection of data containing the history of humanity, storing it into Eden (read: the Internet), which is connectable to from anywhere in space.

Fast forward to the 23rd century, where scientists attempt to recreate Lumi within Eden, complete with her memories and persona. Unfortuantely, the project is under a virus attack, and this is where the player comes in, diving into Eden to purify it and help bring about the success of Project Lumi.

Child of Eden plays much like Rez: you move along a fixed path and destroy (or rather, purify) the surrounding targets. Enemies destroyed go out in a shower of pyrotechnics and sound. The player can either use lock-on shots like in Rez, or use the Tracer, a new weapon that fires rapid-fire shots that are weaker but can destroy purple enemies and projectiles, which the lock-on shot cannot do. There are 5 main levels, called "Archives", each representing a different theme of humanity, and a Bonus Level, "Hope", a lengthy and difficult score attack stage. Players can either use the standard controller just like in Rez, or use the Kinect or PlayStation Move peripherals and make pointing and firing motions to play.

Reception to Child of Eden has been widely positive, with a score of 85 on Metacritic. Many reviewers cite it as an example of a Kinect game done right.

Tropes used in Child of Eden include:
Retrieved from "https://allthetropes.org/w/index.php?title=Child_of_Eden&oldid=1505857"
Categories: