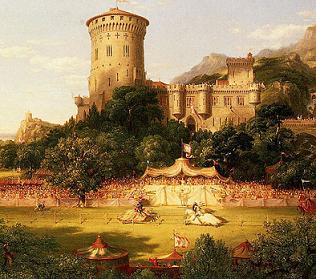 Chivalric Romance is the original romance genre, back from the days when "romance" meant "work written in the vernacular." If you're looking for the sort of romance you might find in a Chivalric Romance, see Courtly Love; the association is what produced the current commonest meaning of romance.

Plentifully supplied with kings and queens, princesses, knights doing noble deeds on the behalf of the beautiful Damsel in Distress, wandering the lands in search of quests, fighting dragons, giants, wild men of the woods, bears, lions, or other knights (often in tourneys, with the prize being the hand of the princess).

Though they differ wildly in their realism, many of them include fantasical elements. The later ones start to turn into the genre Fantasy, in that they include tropes that were not believed in by the writer or audience—not even as possibilities in a far-off land.

Ones about King Arthur and his knights (the Matter of Britain) are among the best known, but in medieval times, there were also those about Charlemagne (the Matter of France) and Alexander the Great (the Matter of Rome). The association could be rather loose, with tales from the Trojan War falling into the Matter of Rome, and despite the claim that these encompassed all romances, in fact there were "non-cyclical", independent romances, such as the Constance tales (all with the same basic plot as Geoffrey Chaucer used), and the tales of El Cid Campeador, the national hero of Spain.

They obviously are Older Than Print and found only in manuscripts. This has produced a great deal of variation in the texts. Recognizably the same tale appears with great changes in locations and even the names of the characters.

Don Quixote was written as a Deconstruction of the genre and is the sole memorial of quite a number of these once famous knights.

Many tales later collected as Fairy Tales or ballads are first found in romances, although we do not know how close they are to the Oral Tradition of their own times.