Everything About Fiction You Never Wanted to Know.
Jump to navigation Jump to search
/wiki/Chris Benoitcreator 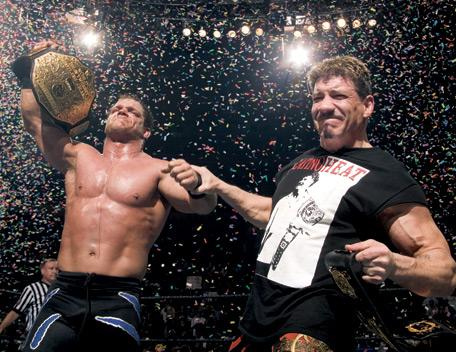 The Canadian Crippler (left) with best friend Latino Heat, in what may be the biggest Funny Aneurysm Moment in Wrestlemania history.

Chris Benoit. The name invokes one of two images: that of one of the greatest professional wrestlers ever, or that of a man whose final days were spent committing the most horrific acts of his life.

Christopher Michael Benoit grew up in Canada idolizing wrestlers like Bret Hart and The Dynamite Kid; in 1985, at the age of eighteen, Benoit debuted in Canada's Stampede Wrestling. From there, Benoit went to various overseas promotions for a number of years (mainly in Japan), then made his debut in ECW in 1994. It was in ECW where Benoit earned the nickname "The Crippler": during a match with Sabu, he performed a back body drop, but Sabu landed right on his head and broke his neck. Though this was an accident, Benoit's "Crippler" nickname stuck with him for the remainder of his career.

In 1995, Benoit returned to WCW (he had a short run there in 1992 and early 1993), and after impressing management with his in-ring work, Ric Flair had Benoit become a member of the Four Horsemen stable; it was during this time that Benoit would feud with Kevin Sullivan, who was also a WCW booker at the time. The angle was that Sullivan's on-screen valet (his wife Nancy) was having an affair with Benoit; to keep the angle steeped in kayfabe, Benoit and Nancy were forced to spend time together to make it appear that they were having an affair. The end result, however, was that Chris and Nancy actually did have an affair, and Nancy left Kevin Sullivan to marry Benoit.

For the next few years, Benoit would go on to win fans over with his in-ring work, but would never break through to the main event level until Vince Russo and Ed Ferrara came into WCW in 1999 during the Monday Night Wars; however, when the two were suspended and Kevin Sullivan was placed back on the booking team, Benoit and a number of other wrestlers revolted and delivered an ultimatum to management: he goes, or we go. To attempt to appease this group of wrestlers, Benoit was booked to win the WCW World Heavyweight Championship at Souled Out 2000. This was not enough to please them, however, and Benoit - along with Eddie Guerrero, Perry Saturn, and Dean Malenko - were granted their releases after the event.

Weeks later, the four men would show up on WWF Raw, coming out from the crowd to attack several wrestlers. Calling themselves "The Radicalz", Benoit and company would end up signaling the beginning of the end of WCW; a little more than a year after their debut in the company, WCW folded and was purchased by WWE.

The next four years saw Benoit slowly built up into a main event caliber wrestler, producing classic matches with the likes of Stone Cold Steve Austin, Kurt Angle, Eddie Guerrero, and Edge. His time on SmackDown's tag division in 2002 resulted in the classic trio of teams known as the "SmackDown Six"; teaming with Kurt Angle, Benoit would face the team of Edge and Rey Mysterio, Jr. at No Mercy 2002 in what was easily a Match of the Year candidate and arguably one of the greatest tag team matches ever.

In 2004, Benoit had arguably the best year of his career: he won the Royal Rumble by lasting the entire match (over an hour after having entered #1), went on to Wrestlemania 20 to win the World Heavyweight Championship in Madison Square Garden in another Match of the Year candidate by making Triple H tap clean to the Crippler Crossface, and he retained the title the next month at Backlash by making Shawn Michaels tap to the Sharpshooter in Canada (a symbolic apology to the Canadian crowd for the Montreal Screwjob). Following that, Benoit stayed near the main event for the rest of the year, feuding with Edge, Randy Orton, and Triple H for the World Heavyweight Championship (Orton defeated Benoit to earn his first reign with that belt at SummerSlam 2004).

After 2004, Benoit was shuffled back down to the midcard as WWE decided to use his skills to help push new talent up the card. He won the United States Championship several times and feuded with up-and-coming star Montel Vontavious Porter (MVP) for months. In 2007, Benoit was placed on the ECW brand and was considered a top contender for the brand's championship; at Vengeance: Night of Champions 2007, Benoit was scheduled to go up against indy darling CM Punk for the vacant ECW Championship.

He would no-show the event.

And then we all found out why.

The next day, Atlanta police found the bodies of Chris, Nancy, and their seven-year-old son Daniel in their home; it wasn't revealed until later that evening -- and a number of fans would not find this out until after WWE had already run a Benoit tribute show — that Benoit had strangled his wife and son before hanging himself in his home gym over the course of the previous weekend.

From that point forward, controversy about Benoit's life and career erupted. Were steroids to blame? Did he go insane due to multiple concussions he suffered over the years? Is it right to bring him up when discussing the best wrestlers ever in light of his actions — and is it right to even remember him as a great wrestler?

The debate about how to properly remember Chris Benoit continues to this day, but not a single person can deny that June 25th, 2007 was the darkest day in professional wrestling history.

Chris Benoit provides examples of the following tropes:
Retrieved from "https://allthetropes.org/w/index.php?title=Chris_Benoit&oldid=1927081"
Categories:
Cookies help us deliver our services. By using our services, you agree to our use of cookies.