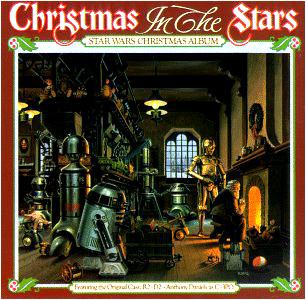 WARNING: Never, ever listen to this.

In the days when sales of vinyl singles really did control the position of songs in the charts, Christmas was the time when Glurge-laden songs topped the charts for weeks as children bought them for grandparents (and grandparents for grandchildren). Ubiquitous in stores, malls, and practically every other place with a PA system in November and December. Every so often somebody will pen an Anti-Christmas Song as an antidote, but the only real way to escape the onslaught is to become a Hikikomori - or go off the grid entirely - for two months a year.

Nevertheless, everyone's got an album that they lovingly pull out from the bottom of the CD cabinet when December rolls around. Despite all the cheap, irritating, and soulless renditions (and re-renditions, and re-re-renditions ad nauseum) to be heard all over the place during the holiday season, the original simple melodies are still there, just waiting to be heard and to remind us why these songs really are merry and bright.

In other words, when done right, these are still indisputably Awesome Music.

By the way, traditional hymns centered around the Nativity are the actual Christmas carols. Tunes about snowfall or Santa are just plain ol' Christmas songs (or, in some cases, winter songs).

Trivia note: At the end of the Vietnam War, as the North Vietnamese Army reached the outskirts of Saigon, the American Forces Radio Service had to alert Americans in the area without panicking the local populace, all while in the process of smashing their equipment and recordings. As one Vietnam vet put it, he knew the end was near when AFRS began playing Bing Crosby singing "White Christmas" in April.

Examples of Christmas Songs include:

These are very much YMMV. One person's Glurge is another person's Crowning Moment of Heartwarming. Please don't natter about how you disagree with an entry.