Everything About Fiction You Never Wanted to Know.
Jump to navigation Jump to search
/wiki/Christopher Guestcreator 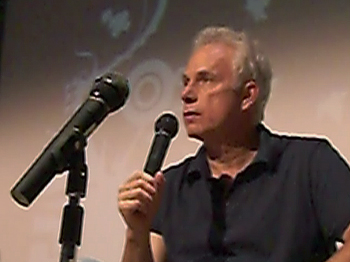 Christopher Haden-Guest, 5th Baron Haden-Guest (born February 5, 1948), better known as Christopher Guest, is an English-American screenwriter, composer, musician, director, actor, and comedian who holds dual British and American citizenship. He is most widely known in Hollywood for having written, directed and starred in several improvisational "mockumentary" films featuring an ensemble cast. This series of films began with This Is Spinal Tap, and continued with Waiting for Guffman, Best in Show, A Mighty Wind, and For Your Consideration. Guest also had a featured role as the evil six-fingered Count Rugen in the film The Princess Bride.

He holds a hereditary British peerage as the 5th Baron Haden-Guest, and has publicly expressed a desire to see the House of Lords reformed as a democratically elected chamber. Though he was initially active in the Lords, his career there was cut short by the House of Lords Act 1999. When using his title, he is normally styled as Lord Haden-Guest. Guest is married to the actress and author Jamie Lee Curtis.

Retrieved from "https://allthetropes.org/w/index.php?title=Christopher_Guest&oldid=1946827"
Categories:
Cookies help us deliver our services. By using our services, you agree to our use of cookies.