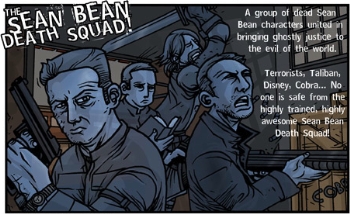 This is when an actor or actress appears in any number of movies, and there's a huge number in which their character doesn't live to see the end of the film. Of course, it doesn't have to be that; there can be a few Disney Deaths thrown in the mix, but the idea stands that these performers have a very unlucky habit of dying in loads and loads of movies. Almost inevitable if the actor is confined to villainous roles.

See also Vasquez Always Dies, when actresses that play Action Girls meet this fate, and Black Dude Dies First, when it's a black actor that gets offed more often than he likes.

See this site for a look into more actor deaths in movies and TV-series.

As a Death Trope, all Spoilers will be unmarked ahead. Beware. YOU HAVE BEEN WARNED.

Examples of Chronically-Killed Actor include:

Parody Hitler: I should have known. Sean Bean... that guy is a two-legged spoiler!

User 1: If you have﻿ a black man and Sean Bean in horror move, who dies first?
User 2: Sean Bean would play the﻿ black guy.

Beppe: "You... you know, the moment my share reaches its top is whenever I die."