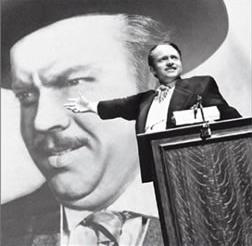 Hey, have you seen Citizen Kane? You probably should; it's practically the Citizen Kane of film.

Inside his unfinished palatial mansion, media mogul Charles Foster Kane lies dying, alone, having lived in seclusion from the world for many years. With his final breath, he utters the word "Rosebud!". The movie unfolds in flashback as Intrepid Reporter Jerry Thompson tries to unravel the significance of Kane's dying declaration through interviewing those who knew him. However, no one he talks to knows just who or what Rosebud was, the closest answer he gets is from Kane's butler who concludes he was just saying a nonsense word. Thompson never does solve the mystery, though the answer is shown to the audience in the final scene.

The conclusion? It is indeed Lonely at the Top.

A classic film from 1941 and the most famous work of Orson Welles. It's considered by many critics to be the Greatest Film Ever Made or at least the first great "modern" film, but most people only know it through Popcultural Osmosis. It's a popular subject of The Parody even though many people no longer know the original. One would never guess it was a Box Office Flop.

Due to it being hyped as the Greatest Film Ever Made, some find it to be a bit overrated when they do see it. Others who are reluctant to watch because of Hype Aversion may find at least some of this film a hoot. But hey, judge not: most have probably never seen the impressive deconstruction by Roger Ebert, in his Special Edition DVD commentary, that attempts to explain some of the subtleties of why it has its particular rank.

Aside from its famous ending, Kane is best remembered for pissing off William Randolph Hearst, who thought that the title character resembled him a little too much -- or perhaps he was angry that Welles's portrayal of Kane's mistress had destroyed the career and reputation of Marion Davies, Hearst's real life mistress. (In reality, Davies was a superb comedienne and a savvy businesswoman who had actually saved Hearst's publishing empire by giving him $1 million after he lost everything - and that was money she'd earned on the screen.) Welles denied that Kane was based on Hearst or any other specific individual, and later expressed regret that the character of Kane's mistress (which was actually based on the wives of Samuel Insull and Harold Fowler McCormick) was assumed by most moviegoers to be an Expy of Davies. No matter the reason, though, Hearst used his influence to kill any chance the film (and even some later Welles-directed films) had for commercial success.

Citizen Kane is the Trope Namer for:
Tropes used in Citizen Kane include:
Retrieved from "https://allthetropes.org/w/index.php?title=Citizen_Kane&oldid=1964503"
Categories:
Cookies help us deliver our services. By using our services, you agree to our use of cookies.