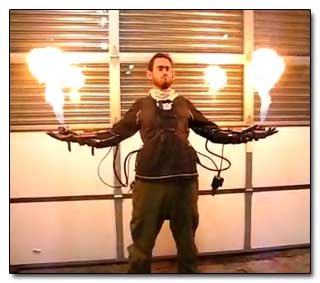 Within many works, the separation between science and magic can be blurred to deceive a bystander. In some cases, one may masquerade as the other. An important justification for many forms of Applied Phlebotinum.

In case you're wondering, here are all three laws. The first law is partially covered by In Theory and the second by Beyond the Impossible.

Examples of Clarke's Third Law include:

Kurz: If this was a regular battle, they'd be even. But that silver AS... it's got some kind of hidden trick going for it. It bounced my cannonball right back at me and toasted my M9! I wonder what magic he's using?
Kaname: Magic, huh? No, I'm afraid it isn't that. This guy isn't using magic but rather... technology... The enemy has it, and it's an integral part of his mecha's defenses.

"'Advanced' here is usually taken to mean 'shown to us by aliens or people from the future' - like television shown to Neanderthals. But we should realise that television is magic to nearly everyone who uses it now."

I mean "magic." How many times have savages concluded "magic" when a "civilized" man came along with something the savage couldn't understand?
How often is some tag, such as "television," accepted by cultural savages (who nevertheless twist dials) when "magic" would be the honest word?

Elric: Do you believe in Magic, Captain?
Sheridan: ... If we went back a thousand years, they could only understand this place in terms of magic.
Elric: Then maybe it is. The magic of the human heart, made manifest through technology

""If a radio landed in the hands of Thomas Jefferson, do you know what Jefferson would do? He would just lock it up, until he figured out it wasn't going to kill him. That's exactly what we do here. We take the unexplained... and we safely tuck it away."

Snake: So it's technology then, not magic?
Otacon: With technology this advanced, who can tell the difference?

Strong Bad: The word technology... means... magic. It's basically anything that's really cool that you don't know how it works. And if it breaks, you have to buy a new one.

It is not magic — and, for Heaven's sake, don't call it that in front of Albia. Everything she does is subject to the laws of nature. Hers is a science so advanced it merely seems like—

Maxim 24: Any sufficiently advanced technology is indistinguishable from a big gun.

"Any technology distinguishable from magic is insufficiently advanced."
—Gehm's corollary