Everything About Fiction You Never Wanted to Know.
(Redirected from Clerks 2)
Jump to navigation Jump to search 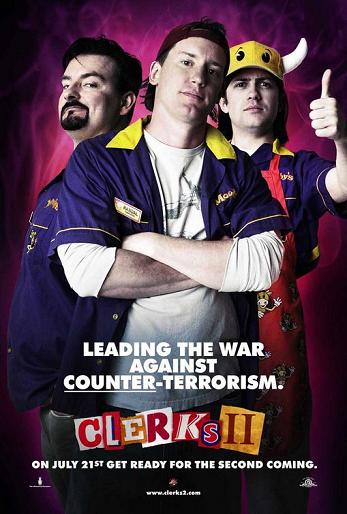 The 2006 sequel to the classic independent comedy film Clerks, and for now, the final film in the View Askewniverse.

Ten years after the events in Clerks, Dante opens up the shutters on the Quick Stop windows to find that's the store's on fire (thanks to Randal leaving the coffee pot on). Cut to about a year later: Dante and Randal are working at the local Mooby's franchise, and Dante is working his last day since he's getting ready to be married. Of course, things never quite go according to plan in the View Askewniverse...

Tropes used in Clerks II include:
Retrieved from "https://allthetropes.org/w/index.php?title=Clerks_II&oldid=1829280"
Categories:
Cookies help us deliver our services. By using our services, you agree to our use of cookies.