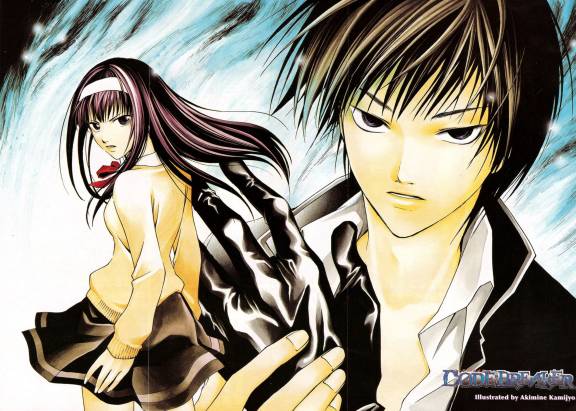 "An eye for an eye, a tooth for a tooth, and evil for evil."
—Rei Ogami

Riding the bus one day, Sakurakouji Sakura looks out the window to see people being burned alive with a blue fire and a boy her age who's unharmed and standing over the people. She comes back to the site the next day and there are no corpses or evidence of any kind of murder, just a small fire. She then goes to class to find there's a New Transfer Student who looks exactly like the boy she saw before and wears a black glove only on his left hand. Later she finds out that he is the sixth "Code:Breaker", a special type of assassin with a strange ability, who is only a member of a secret organization that serves the government.

Tropes used in Code Breaker include:

Code:Emperor: Of the seven deadly flames that incinerate the Seven Deadly Sins; the second flame, "Belphegor", the Flame of Limbo... is now yours, Rei.

1. Yuuki: Anger - he's got a temper
2. Ogami: Pride - won't ask for help and takes the blame for everyone's sins
3. Prince: Sloth (got drunk instead of dealing with her family's death and the dark side that protected her)
4. Kouji: Lust or Gluttony (fought off-screen)
5. Toki: Greed (fought off-screen)
6. Heike: Lust or Gluttony (already defeated 100 years ago)
7. Yukihina: Envy (already defeated; stated by Heike)