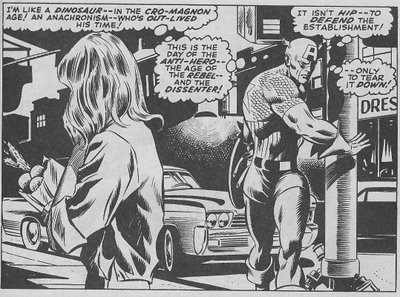 It has been a long time since defending the establishment was cool, hasn't it?

Whenever a Human Popsicle shows up in a story, there's a 50/50 chance you'll get this as well.

To put it simply, its a Fish Out of Water story without the hilarity ensuing. For a better explanation, when a cryonics patient wakes up, most everyone in the future tends to be dour, pessimistic, cynical, or any resulting combination thereof. The Good Old Ways have been forgotten. Even the group's designated humorous guy tends to either be a Deadpan Snarker or a No Celebrities Were Harmed Homage to somebody like George Carlin or Bill Hicks. The formerly frozen character may or may not fit in (mostly the latter happens).

Depending on the tone of the story, the former popsicle might convince his new associates to lighten up a bit, or he might be dragged down by his bleak situation.

The reason for this universal (or at least planetary) viewing of the glass as half-empty varies. Either something very bad happened to the world, or the story is a satire on society's becoming more cynical. Compare Crapsack World (this may be a futuristic version), or in extreme cases, World Half Empty. See also Good Is Old-Fashioned. Rip Van Winkle is the slightly shorter sister version of this trope.

Retrieved from "https://allthetropes.org/w/index.php?title=Cold_Sleep,_Cold_Future&oldid=1650195"
Categories:
Cookies help us deliver our services. By using our services, you agree to our use of cookies.