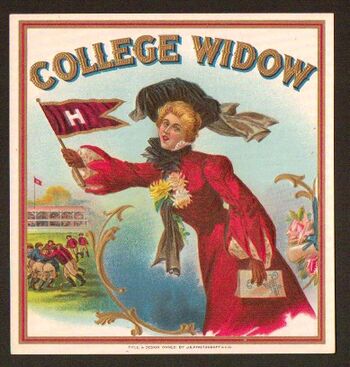 You know it was once a prominent trope when it was used as a brand name for cigars.

A character type dating to at least the early 20th century (there was a 1904 Broadway production entitled The College Widow), but now a Forgotten Trope: a single woman living in a college town who attracts, encourages and enjoys the attention of the young men from the local school. Often she is the younger wife of a deceased faculty member or college president, but in any case she is barely older than the students she courts. As a genuine widow, she came upon a healthy taste (and talent) for sexual relations legitimately, but her youth left her with her wifely desires still burning hot; she thus turns to the school's handy supply of strapping young men to fill them. Her house, just off the campus, is usually the home to at least one Wild Teen Party a week if not more, and during Prohibition it's all but a speakeasy.

In an era when most colleges and universities were male-only, she was usually the only outlet for a healthy young man's sexual urges short of the nearest brothel, and often far less expensive. Naturally, other local citizens viewed her as being a singlehanded danger to the moral rectitude of hundreds if not thousands of impressionable young men. Usually seen as a Femme Fatale if not The Vamp, although she normally serves no master but her own libido.

A Forgotten Trope since at least the 1960s, if not decades earlier. With the advent of co-education, this character type died a quick death as accusations of sexual iniquity quickly shifted to female college students (then, subsequently, male college students, as well).

Examples of College Widow include:

Retrieved from "https://allthetropes.org/w/index.php?title=College_Widow&oldid=1776172"
Categories:
Cookies help us deliver our services. By using our services, you agree to our use of cookies.