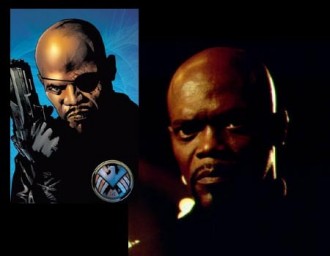 It even got lampshaded in the comic.

Sometimes in comics or animated shows, a character is made to look like a particular actor or other celebrity whom the artist imagines playing the character. This might be out of fandom for the actor, because the character fits with the actor's well-known roles, or in the hope that the actor would be flattered and try to get the comic adapted as a movie.

Fantasy casting can also occur in non-visual media such as (non-illustrated) novels, but can be harder to spot unless Word of God acknowledges it, or the character is closely based on a particular role the actor is associated with.

For when the character is a direct impression or parody of a celebrity's public persona, see No Celebrities Were Harmed. For when an animated character is designed to resemble the real-world voice actor, see Ink Suit Actor. Not the same thing as when a comic book or animation is spun-off from an earlier live-action film or TV show and the characters inevitably are drawn to look like the live-action actors, which would be Reality Casting. However, sometimes there are borderline cases where a comic or animation is adapted into a live-action medium and artists start drawing a character to look like the actor in the adaptation.

Retrieved from "https://allthetropes.org/w/index.php?title=Comic_Book_Fantasy_Casting&oldid=1850488"
Categories:
Cookies help us deliver our services. By using our services, you agree to our use of cookies.