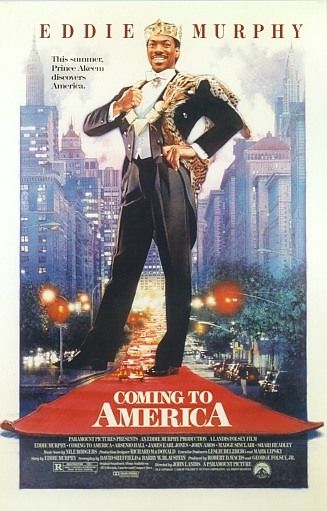 1988 comedy starring the underrated comedic duo of Eddie Murphy and Arsenio Hall (before his show).

Heir to the throne of Zamunda, Prince Akeem Joffer spends his days being pampered and spoiled by all those who serve him; he is not even allowed to dress himself or tie his own shoes. This lifestyle has grown frustrating for the young prince, especially when it comes to his future bride being chosen for him without his say. Akeem implores his father, King Jaffe Joffer, to allow him to choose his own wife, but the monarch declares that the prince cannot defy tradition and insists that the courtship ceremony continue that evening on Akeem's 21st birthday.

That night, Akeem meets his future bride. She is beautiful, obedient and completely unable to think for herself. Despite his best efforts, Akeem cannot convince her to act as anything other than a mindless slave. He resolves that he will find his own wife; a woman with grace, elegance, taste and culture who loves him for his personality, while still having the kind of strength of will he can respect -- a woman suitable for a king. Tricking his father into letting him travel before getting married, Akeem takes his best friend and servant, Semmi, and heads out to find his future queen. Never having been to North America, the duo decide to conduct their search in the most logical place they can think of: Queens, New York City.

Akeem and Semmi pose as poor African students while they conduct their search, but being naive to the way America works they can only attract women with serious emotional problems. Akeem is almost ready to give up until, one night, he attends a rally where he lays eyes on Lisa McDowell. She is his dream in every way and Akeem is convinced that he has found his future Queen, but there's only one problem: she's already taken...

Considered something of a Spiritual Sequel to Trading Places (also directed by John Landis), the story was conceived by Eddie Murphy and Art Buchwald (though Murphy was given sole credit for its conception in the credits, something that Buchwald wasn't too happy about). It enjoyed both domestic and worldwide success when it was released, even grabbing a couple of Academy Award nominations for costumes and makeup. The film is also notable for being the first in which Eddie Murphy plays more than one role, a trend that he would continue throughout the rest of his career.

A pilot for a sitcom series based in the film was filmed but not picked. A sequel, Coming 2 America, was released on the Amazon Prime streaming service in March 2021. It involves a newly crowned Akeem discovering that he had a son in America that he didn't knew about and, since Zamunda's succession rules invokes Heir Club for Men, he must retrieve him and groom him as a heir.

Tropes used in Coming to America include:
Retrieved from "https://allthetropes.org/w/index.php?title=Coming_to_America&oldid=1877315"
Categories:
Cookies help us deliver our services. By using our services, you agree to our use of cookies.