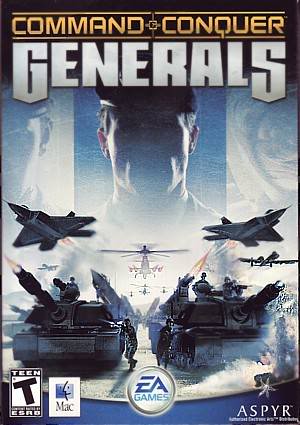 In the modern world... great leaders resolve their conflicts... with words.[1]

Command & Conquer: Generals is a Real Time Strategy game set Twenty Minutes Into the Future, using more-or-less existent, in-development, or theorized technology. The Global Liberation Army, an Arab-ish terrorist organization Ripped from the Headlines after 9/11, has declared war on the People's Republic of China and the United States of America, forcing the two superpowers to cooperate against the militants. An Expansion Pack followed, Zero Hour, which introduced more missions, more units, and three specialized generals to choose from within each main faction. The game is canonically unconnected to the other C&C series, and in fact bears more resemblance to Ensemble's Age of Empires and Blizzard's StarCraft and Warcraft series.

Generals was met with instant controversy from both Media Watchdogs, who objected to the national stereotyping and the fact that you could play as totally-not-Al-Qaeda, as well as longtime Command & Conquer fans, who objected to their franchise's name being associated with an RTS that more strongly resembled a Blizzard game than traditional Command & Conquer gameplay. The game earned good reviews for delivering a solid, action-packed RTS, and was particularly praised for the General system, which allowed players to rise in rank during battle and unlock unique and possibly game-winning units and special abilities.

A reboot/sequel, was being developed by Electronic Arts and a new division of BioWare, "BioWare Victory" (headed by Jon Van Canegham), in a world where all of the politicians and diplomats got Board to Death at a Peace Conference by a newly reawakened GLA; development of the game was canned in 2014.

I have many bullets to spare! -- Gatling Tank crewman

Gen. Alexander: Oh? What's that sound? And look, there's a light in the sky!

Gen. Tao: The glow! The wondaful glow! Can you no see it, general?!

Dr. Thrax: See, you can tell when it's *mwah* just right, when the flesh falls off the bone!

Gen. Kwai: Aaaah... can you feel the thunderous song of approaching armor, general?

Prince Kassad: Now you see me... now you're dead!

Gen. Leang: Two warriors meet on the battlefield. Who is to say who will win? I do, that's who! Me! You will fall, general!

Gen. Townes: I've drawn the line in the sand, General (With his Particle Cannon, no less)! I dare you to cross it!

Gen. Granger: Be advised, this area is under the control of airforce general Malcolm Granger. Withdraw now! or prepare to be bombed back to the Stoneage!

You find yourself at the end of your rope, and only now do you realize that the rope is on fire! -- Gen. Leang

Kick it into high gear!
Rapid fire!
Spin them up!


Don't stop till it's over!
—Gatling Tank crewman