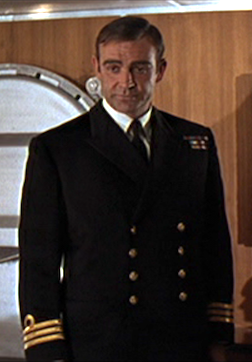 Maybe because it sounds really cool, but Commander is a very popular rank in fiction.

In real life navies, commander is the second-most senior field rank, right below the rank of Captain. A commander can be the commanding officer of a ship (a.k.a. The Captain), but generally he is the first officer, or as we put it: the Number Two. The army equivalent is lieutenant colonel; while there is no commander rank in any army, it is used as a title.

Someone who qualifies as commanding coolness can also be of the rank Lieutenant Commander. In the old days, lieutenants would be given command of ships that didn't necessitate the presence of a Captain or Commander. The rank itself was initially called "Lieutenant Commanding" or "Lieutenant in Command" before it was officially named by the US Navy in the 19th Century. This practice is continued today, with smaller ships like minesweepers and submarines being captained by Lieutenant Commanders.

In science fiction, commanders usually have their traditional position as executive officer. Some works will have commander as a general staff rank, along with the title or rank (or both) of the supreme leader of military forces. See also Colonel Badass. A commander who is decidedly uncool may be a Commander Contrarian.

Examples of Commanding Coolness include: