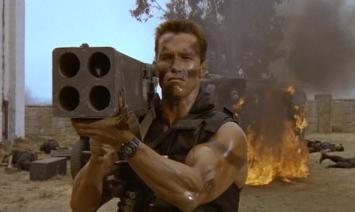 You can't get much more macho than this.

Possibly the most awesome film Arnold Schwarzenegger ever made, and certainly the most homoerotic. Commando tells the story of John Matrix (Arnie), a retired special forces colonel whose daughter is kidnapped. To get her back he must, like, kill a prime minister or something? But thankfully he decides to ignore these demands and just kills them all instead.

Best known for Schwarzenegger displaying his distinctive tongue-in-cheek humor for this kind of over-the-top action film.

Not to be confused with the long-running British Comic Book Commando, which is a little more sedate in its overall narrative. Does not involve Going Commando, either.

Tropes used in Commando (film) include:
Retrieved from "https://allthetropes.org/w/index.php?title=Commando_(film)&oldid=1868069"
Categories:
Cookies help us deliver our services. By using our services, you agree to our use of cookies.